Tk 20b interest gets waived 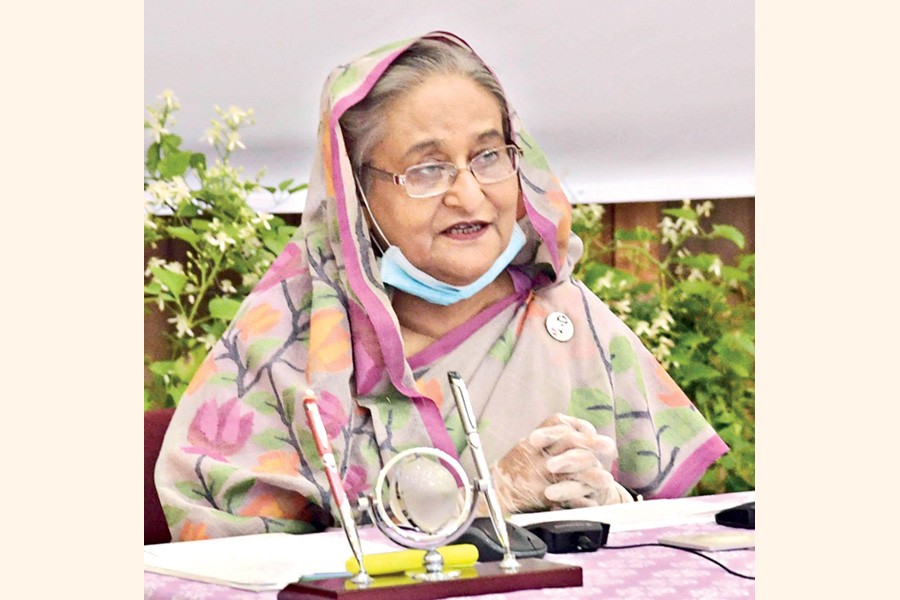 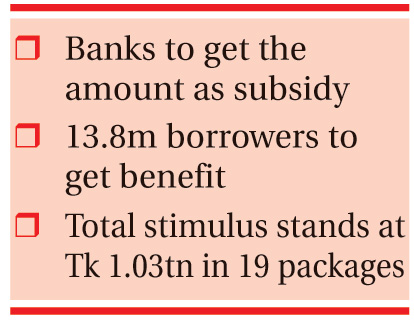 "Today, we're declaring a new incentive package which is the 19th. Under the package, the borrowers need not repay Tk 20 billion interest of the credit which they took from the banks for doing business," she said.

Sheikh Hasina added: "The government will provide the interest amounting to Tk 20 billion to the banks as a subsidy and it will directly benefit nearly 13.8 million loan recipients."

The premier made the announcement while formally publishing the SSC and other equivalent exam results through a videoconference from her official Ganabhaban residence in the city.

She said the government earlier suspended the payment of interest of the loans for two months which the people took from the (commercial) banks for business purpose.

"The total amount of that interest now stands at Tk 165.49 billion and of the money, the government will give Tk 20 billion to the (commercial) banks as a subsidy and the borrowers don't need pay it … we're freeing them from it (interest)," she said.

In this connection, Sheikh Hasina said the borrowers will pay the rest of the interest in 12-month instalments.

"The government has made this arrangement for the benefit of the people as their trade and commerce remained halted for over two months due to coronavirus outbreak," she said.

"We've taken these measures so that the people are not plagued with the burden of the loans," she added.

The premier said with the announcement of this new incentive package of Tk 20 billion, the total amount of 19 stimulus packages has stood at Tk 1.03 trillion (1,03,117 crore ) which is equivalent to US dollar 12.13 billion. The amount is 3.7 per cent of total GDP.

"I don't know whether any other country of the world gave such facilities.

But we're giving," she said.

Sheikh Hasina said the government has announced special stimulus packages for all sections of the people in view of the COVID-19.

"We've given incentive of Tk 50 billion to farmers at low interest rate to offset the agricultural fallout of the coronavirus," she said.

The premier mentioned that the government declared separate stimulus packages for the big, medium and small industries including cottage industries so that they can overcome the losses caused by the pandemic.

"Even, we've provided special stimulus package for those who do small business and run shops by taking microcredit," she said.

The prime minister said the government has taken many steps to mitigate the plight of the people affected due to COVID-19 outbreak. "Through it (pandemic) will put pressure on the national budget, to be placed on June 11, we've completed the work on framing the budget," she said.

Sheikh Hasina said the government is reopening offices, trade and commerce and shops gradually to keep operative the wheels of the economy.

"The ways of the people's income have almost stopped. Though we're helping them, the people, particularly low-income group, are suffering a lot in the current situation," she said.

The prime minister said COVID-19 is such a virus which is not seen with bare eyes. "It has such a power which has stirred the entire world and stopped the wheels of economy and we're moving in such a situation. But whatever situation arises, we've to advance by combating those," she said.

Sheikh Hasina said: "It's necessary to protect ourselves. Like that we've to pay attention so that the wheels of the economy continue to run."

The Prime Minister said the leaders and workers of Awami League and its associate bodies including Chhatra League and Krishak League helped the farmers in harvesting paddy following her directives.

"There will be no crisis of food in the country and we could ensure food security In-sha Allah," she said.

Sheikh Hasina said the government is extending support to all in this perilous time and the administrative officials, the members of the armed forces and law enforcement agencies and the (ruling) party men are performing their respective responsibilities. "It's an unprecedented scene," she said.

The Prime Minister said the entire nation, being united, has stood beside the vulnerable people with whatever strength the people have. "For this, I extend my sincere thanks and gratitude to all," she said.