Buses start plying, but not going by limit 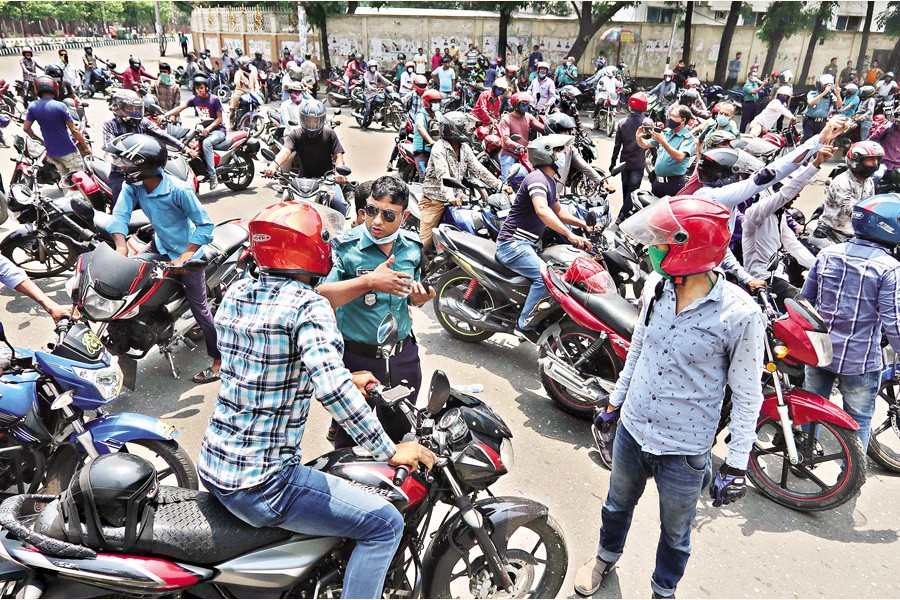 Motorcyclists, who earned their livelihoods through ride-sharing services, have blocked a road near the Dhaka Metropolitan Police Headquarters in the city on Wednesday, protesting against the government's ban on such services amid the Covid-19 — FE photo by Shafiqul Alam

After two days of closure, operation of public transport resumed at half capacity in the city on Wednesday, easing sufferings of commuters and office-goers on the third day of Covid-induced restrictions.

The capital also saw protests from different quarters against the shutdown amid restriction on public gathering, vehicular movement, and closure of non-essential businesses.

Besides, many of the city dwellers were seen defying health guidelines, issued to prevent spread of the Covid-19, while the country recorded the highest number of coronavirus cases on the day.

According to the Directorate General of Health Services (DGHS), 7,626 new coronavirus cases were detected along with 63 deaths in the last 24 hours until 8:00 am on Wednesday.

Public transport again started plying across the city on the day with 60 per cent increased fares, fixed by the government to ensure proper distancing among the passengers.

However, many buses were seen taking more passengers than the limit despite realising increased fare.

Md Aminul, conductor of one such bus - Suprovat Paribahan, said, "There are more people waiting on the roads during office hours compared to the number of buses. If people forcibly get on the buses, what can we do?"

Morshed Alam, who was waiting to avail a bus near Rampura Bazar area to go to his office at Uttara at around 10:30 am, told the FE: "The government banned all the public transport while keeping all the offices open ... what type of policy is it?"

Bus services resumed but they were taking passengers at half capacity, he said, adding: "I have been waiting for over 45 minutes, but couldn't get on any."

At least bike services should be allowed to ease sufferings of office-goers, he opined.

Meanwhile, owners of small businesses in Gulistan area demonstrated and brought out a rally for the third consecutive day, demanding reopening of their respective outlets.

Under the banner of Ready-made Garments Traders Cooperative Association, small business owners formed a human-chain and chanted slogans in favour of their demands in front of the Fulbaria Supermarket in the area at around 11.00 am.

The traders demanded that the authorities allow them to do business by maintaining health guidelines.

However, a clash erupted between the protesters and the police when the traders moved to Gulistan intersection and blocked the road.

As the law-enforcers tried to clear the road for vehicular movement, the demonstrators started throwing brickbats at the police, resulting in chase and counter-chase between the two parties.

On the other hand, bikers of several ride-sharing companies blocked city streets at different points, demanding lifting the ban on app-based bike-sharing service following resumption of public transportation in the cities.

The riders blocked roads by parking motorbikes at Mogbazar, National Press Club, Khilkhet, Mirpur and Shahbag, according to a news agency.

Citing Additional Commissioner (Traffic) of Dhaka Metropolitan Police Md Munibur Rahman, the agency also added that the protesters blocked roads at different points to press home their demands, but they cleared the blockade after 30-40 minutes.

The decision to relax the restriction on public transport was taken on Tuesday for 11 city corporation areas, including Dhaka and Chattogram, where buses would operate from 6.00 am to 6.00 pm by keeping 50 per cent of the seats vacant to ensure proper distancing.

Road Transport and Bridges Minister Obaidul Quader in a virtual press conference on the day said the government approved conditional resumption of the public transport, considering sufferings of public and private employees.