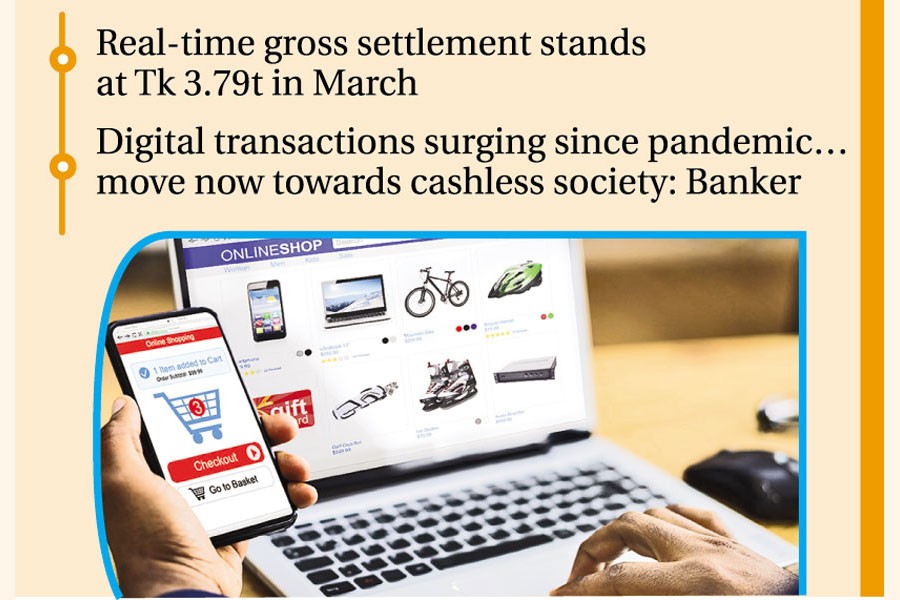 Transition to cashless economy in Bangladesh continues to gather pace after the pandemic induced a massive shift to digital shopping and payments, experts say.

However, they see this most modern mode of transactions still card-dependent in many cases.

They note that the move to more robust digital-payment methods was certainly happening well before the pandemic but the viral invasion helped ramp it up at a time when there were restrictions on movement of people to stem the tide of infections.

Stores shut down and consumers were forced to buy nearly everything online in urban areas, with contactless ways to withdraw and pay. Offering contactless payment methods is one of the most important safety measures during the pandemic period.

In March 2022, the number of internet-banking customers increased by nearly 400,000. The transactions grew by Tk 25.82 billion to Tk 231.4 billion in the month (March), according to central bank data.

Transactions through ATM, POS, CRM and e-commerce surged by 3.63 million in number while the volume grew to Tk 313.88 billion in March-up by Tk 43.2 billion from December last, the data show.

Transactions through RTGS (real-time gross settlement) stood at Tk 3.79 trillion in March last, up by more than Tk 1.0 trillion in three months from December 2021. This is an electronic settlement system where the transfer of funds takes place from one account of a bank to that of another bank in real time and on a gross basis.

The number of MFS (mobile financial service) accounts in the urban areas increased to 50.2 million although there is a drop in the same in rural areas.

The behaviour is opposite to the urban areas as the rural people prefer cash transactions during this restriction-free situation.

The total MFS accounts in the rural areas in March were 56.7 million, down by 5.6 million from December 2021.

Syed Mahbubur Rahman, CEO and managing director at the Mutual Trust Bank (MTB), told the FE that the digital transactions have been surging since the beginning the pandemic. "This now has accelerated further and the move is to reach a cashless society."

"Many countries around the world continue to increase tap-to-pay transaction limits, but contactless payment in Bangladesh is to stay home and safe. But this adoption is booming …"

Mr Rahman said that the MTB has now partnered many online shops to attract customers through alternative channels.

Md Shaheen Iqbal, a deputy managing director at the SME-focused private commercial bank BRAC Bank, also says the covid has boosted the move toward attaining a cashless economy. "The customers feel comfortable and get hassle-free services."

This, he says, is secure and any problem can be addressed immediately. Such an economy will give more revenues from the government-end and encourage a black money-free society.

"There are many countries that discourage cash transactions by imposing taxes on cash-carrying," adds.

The non-traditional banker points that the pandemic changed what consumers want at checkout. "They are increasingly looking for a 'less personal, more digital' interaction now."

He terms the covid a big catalyst for the adoption of digital payments and digital forms of commerce although many problems were created by some dishonest e-commerce enterprises.