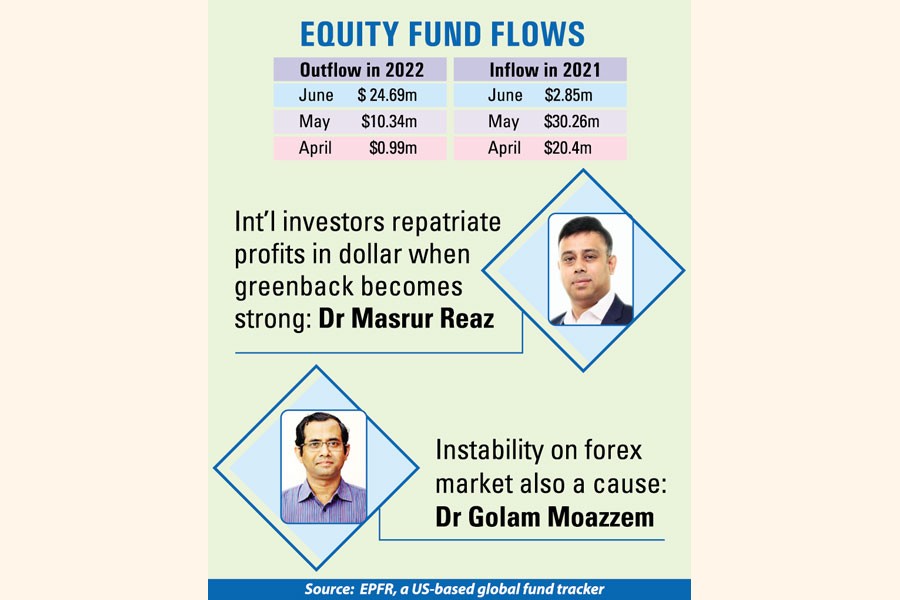 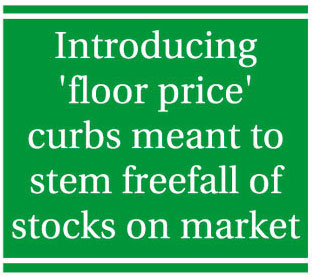 Bangladesh's capital market experiences tantrums amid unprecedented capital outflows since April, which many describe as a result of recurrent depreciation of the local currency against the dollar.

Bangladesh equity fund withdrawals in June were worth US$ 24.69 million, $10.34 million in May, and $0.99 million in April last, according to data prepared by EPFR, a US-based global fund tracker, for the Financial Express (FE).

Foreign portfolio investment in Bangladesh had been stable since October 2020 as overseas investors gained exposure to the country's cheaper stocks.

However, from a macroeconomic perspective, foreign investors still have low exposure to the country's financial market relative to other frontier and emerging markets as the markets are much more efficient than Bangladesh's.

The drop in foreign portfolio investment adds a new challenge to the already-volatile capital market which is now forced to introduce "floor prices" to stem an unprecedented fall of stocks on the market recently.

Local economists familiar with the capital market say the deprecation of local currency, power crisis, and fast-depleting foreign-exchange reserves may be the main triggers behind the withdrawals of the foreign funds from the market.

They think if the government reaches successful negotiations with the global lenders, the situation may be reverse or positive in months ahead.

Dr M. Masrur Reaz, chairman at the Policy Exchange of Bangladesh, a private think-tank, told the FE that the international investors repatriate their profits through dollar and when the dollar becomes strong due to the weakening of local currency, they withdraw their funds.

"The investors are much smarter and they prefer to minimize the losses," Dr Masrur notes.

He says until the local currency becomes stable, the investment scenario will not improve.

Dr Masrur, who had worked at the IFC or International Finance Corporation, says local investors also have a lot to lose as withdrawal of or sale by foreign institutional investors often pulls the price down, making strong-fundamental companies under-priced on the market

Dr Khondaker Golam Moazzem, director (research) at the country's oldest think-tank, the Centre for Policy Dialogue (CPD), says: "To my mind, this is due to the instability on the country's foreign-exchange market since the beginning of the current calendar year."

When the local currency weakens, the international investors withdraw their funds.

Dr Moazzem, who is an industrial economist and interested in private investment, including FDI, feels that the fund flows may turn positive when the government will reach agreements with international lending organizations, including the IMF (International Monetary Fund).

The foreign investors may think that there may be a restriction on the dollar repatriation if the reserves situation dips further.

However, the CPD economist says the same situation also occurred during the Covid-19 pandemic.

Data also show that the Bangladesh market had eight straight months of portfolio cross-border outflows in 2020 by international investors at a time when many capital markets were shut.

In the meantime, the market capitalization in June last fell to US$55 billion (exchange rate Tk 94), in March $57, and in January $59 billion.