Industrial sector to bear the brunt of Covid, it says 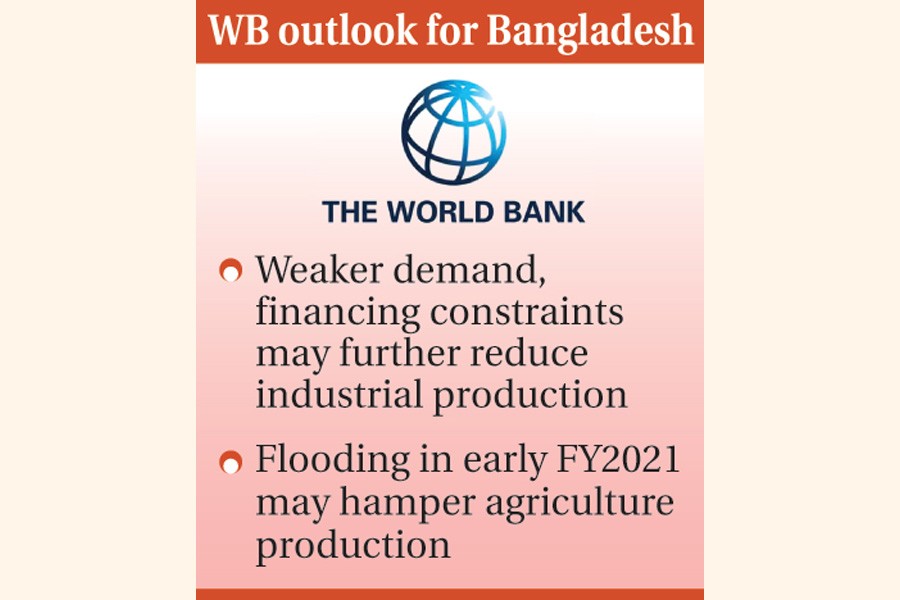 The World Bank has projected a 1.6 per cent economic growth for the country during the current fiscal, decelerated by shrinking industrial output.

The Washington-based lender's estimate is 6.6 percentage points lower than 8.2 per cent the authorities want to achieve in fiscal year 2020-21.

It also lowered its forecast to 2.0 per cent Gross Domestic Product (GDP) growth for 2019-20, down from the government's provisional estimate of 5.24 per cent.

However, the Asian Development Bank (ADB) said Bangladesh's economy is expected to grow at a rate of 6.8 per cent in the current fiscal.

The WB's projections came in its "Economic Update for South Asia," unveiled on Thursday from its headquarters in Washington DC.

At a virtual press conference on Wednesday, the WB chief economist for South Asia Hans Timmer told the FE lower private consumptions, deepening of COVID-19 impact, and the impact on remittances and exports might reduce the growth prospect for Bangladesh.

Mr Timmer said as extended national shutdown, a sharp decline in exports, and lower private investment slowed GDP growth in FY2020 to an estimated 2.0 per cent.

According to the WB's projection, the Bangladesh's industrial sector would be the worst victim of the COVID pandemic as its growth would collapse to -0.9 per cent in FY2021 from a peak of 12.7 per cent two years ago.

Besides, the service sector growth could decline significantly to 2.9 per cent in the FY2021 from 6.7 per cent two years back.

The fall in the agriculture sectoral GDP growth could be 2.6 per cent in current fiscal from that of 3.9 per cent in FY2019.

However, the WB has projected an economic recovery in the next FY2022 as it has forecasted a GDP growth to 3.4 per cent, supported by a rebound in export demand, remittance inflows, and public investments.

The lender warned the impact of COVID-19 on the Bangladesh's labor market will likely increase the poverty significantly.

"Poverty is expected to increase substantially in the short term, with the highest impact on daily and self-employed workers in the non-agricultural sector and salaried workers in the manufacturing sector."

Urban areas will continue to be disproportionately affected, with an estimated 68 per cent of directly affected workers located in Dhaka and Chittagong, it added.

About the inflation, the WB said inflation is projected to remain above target due to expansionary monetary and fiscal policies and higher food prices.

On the current account balance, it said the balance is expected to widen with a decline in exports, due to continued low external demand, and a decline in remittances, due to the return of workers from overseas.

The fiscal deficit is likely to rise as recurrent expenditure on social protection measures remains elevated in the near term, and capital expenditure increases in the post-COVID-19 recovery phase, the global lender said.

"While growth is expected to recover over the medium term, downside risks include a prolonged COVID-19 pandemic and financial sector fragility," it explained.

In the context of COVID-19 disruptions, fiscal risks may rise, particularly if tax reforms are delayed or infrastructure projects face cost overruns, the bank said.

Increased deficit financing from domestic banks may put upward pressure on interest rates and may further constrain credit to the private sector, the economic update said.

On the financial sector, the WB has outlined some challenges such as deviations from international regulatory and supervisory standards, the absence of a bank resolution framework and weak governance in state-owned banks.

The introduction of interest rate caps is an ongoing challenge, impairing the health of the banking sector, the economic update said.

About the external risks, the bank said while external demand for RMG products is stabilising, the recovery is fragile.

Going forward, the government's COVID-19 response will remain a paramount priority, including testing, quarantining and treating patients and providing economic relief to the poor and vulnerable, the lender said.

When asked about the support for COVID vaccine, WB Vice President Mr Hartwig Schafer told reporters that the bank is working out the expected support to the member countries on vaccine procurement after its development.