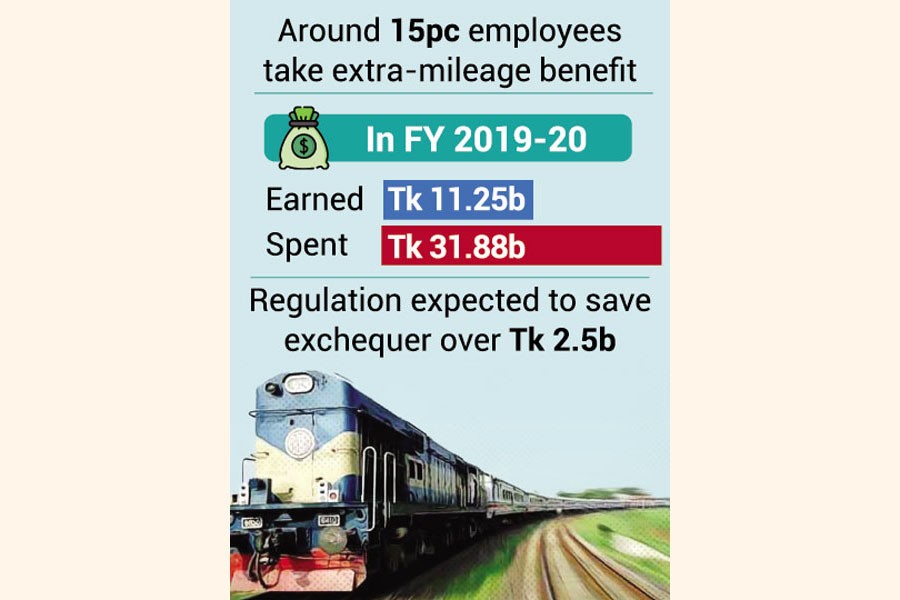 A donor-driven reform recipe is in the final stage of implementation to minimise superfluous operational cost of Bangladesh's rail transportation that far outstrips its earning.

An age-old 'mileage' system of extra billing by staffers is blamed for much of the escalating expenses Bangladesh Railway (BR) has to count, and the government has undertaken the reform aiming to lessen "misuse of resources" and make the popular mode of transport financially sound, sources say.

The government is set to tighten its fist on the 'mileage system' or 'running bill system' in order to bring discipline in the railway's pay-and-package system.

Mileage or running bill is an age-old system under which railway staff members claim additional pay for duties beyond eight hours. Railway guards, loco-masters, train ticket checkers and other crew members usually remain on board while trains plying.

People at the finance division say that rail staffs take much more financial benefits than the actual in the guise of mileage bill. Around 15 per cent of the 26,135 railway employees take the benefit.

Under the mileage system they get one-day equivalent compensation after travel of 100 kilometres.

The government may save minimum Tk 500 million monthly once the system is regulated. Besides, over Tk 2.0 billion may be saved annually in gratuities paid for the railway employees, according to SPFMS or 'strengthening public financial management programme to enable service delivery'.

Under the package reforms also are the strengthening and monitoring of SOE performance, ensuring the timely submission of central government financial statements for auditing, and strengthening the internal audit function.

"Actually we are not scrapping it-we are in favour of better regulation of the system," said one official placed in the project.

The principal transportation agency that covers a length of 2955.53 route kilometres is a very important mode of inland transport linking the entire length and breadth of the country. Its healthy growth naturally contributes to the economic development of the country.

In the meantime, some people at the Railway told the FE that such move may create chaos as they have been enjoying the facility for long as per the laws concerned.

"The locomotive masters, guards and TTEs perform duties beyond eight hours during long journeys. So, they deserve the benefit," said an official at the Bangladesh Railway.

The BR operates a fleet of 360 passenger and freight trains on its 3,093-km network across the country.

Railway transported 63.99 million passengers in the 2019-20 fiscal year, compared to 92.71 million in the previous year, largely because of travel restrictions forced by the pandemic.

Railway earns more than 80 per cent from passenger transportation and its earning was Tk 11.25 billion in the 2019-20 fiscal year while its total operating cost far outstripped it to stand at Tk 31.88 billion, over 4.0 per cent higher than previous year's.