A wind of change may reorder telecommunications-network business in Bangladesh as a new policy in the making will open the sector to foreign investment and put local entrepreneurs to quality test.

Sources say the transition involves some initial pains, as the government will have to accept direct revenue loss and the existing operators face the challenge of standard upgrading. 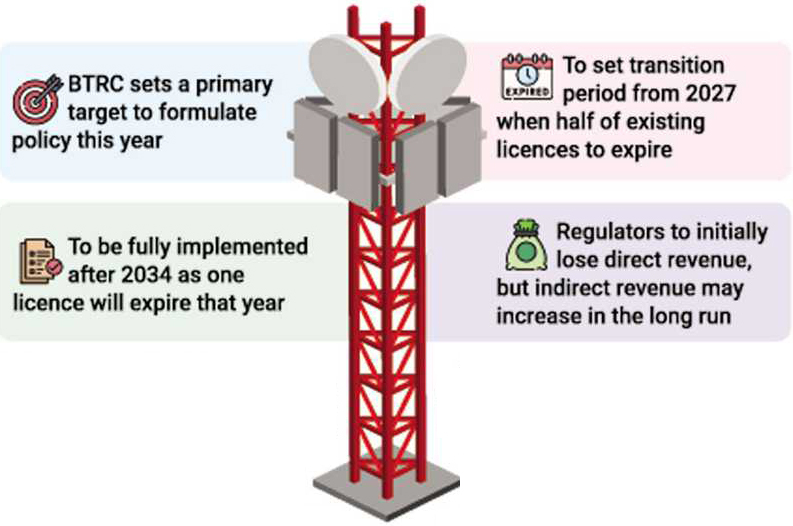 "But, in the long run, the change will bear fruit for all--government's indirect revenue will redouble, huge jobs will be created and service qualities enhanced," says an official at the regulatory body.

All International Gateway (IGW), Interconnection Exchange (ICX) and International Internet Gateway (IIG) will be required to take new licences on expiry of current ones by 2027 under the proposed Telecom Network Policy 2023, according to a BTRC commission meeting's decision taken recently.

According to Bangladesh Telecommunication Regulatory Commission (BTRC), most of these licences are destined to die off in tandem before 2027. If any licence expires before 2027, they can apply for extension up to the cutoff time (2027) only.

The telecom regulator is bringing the existing bundle of 29 categories of licences into four categories under the proposed Telecom Network Policy.

The BTRC is bent on making thorough changes to the International Long Distance Telecommunications Services (ILDTS) policy in a bid to introduce "a unified licensing system for enhancing the quality of services at low costs, reducing the operating expenses and boosting the efficiency of operators".

As per the draft policy on the anvil, the telecom regulator will introduce four types of licences: infrastructure, service, retailer, and special category.

At present, it is issuing around 2,900 licences under the 29 generic categories.

Licences, including Nationwide Telecommunication Transmission Network (NTTN), tower sharing, submarine cable and ITC-related ones, will be issued under the infrastructure- licence category as part of the unified licensing system.

Licenses like Mobile Number Portability (MNP) will be out in special-category basket.

BTRC sources say the commission has primarily set a target to formulate the policy this year.

Before the new ILDTS policy comes into effect, the BTRC will set a timeline as 'transition period', up to the day when at least half of the licences will become time-expired.

"If any licence expires after the transition period, the licence-holder has to apply under the Telecom Network Policy to have it renewed," says the official.

The BTRC plans to set the transition period from 2027 as at least half of the licences will run out of life that year.

It will be possible to fully implement the Telecom Network Policy after 2034 as one licence will expire that year.

Sources say the new policy, which will be "dynamic, transparent and effective", will encourage and create scope for foreign investors but it will be a challenging one for local investors.

Meanwhile, the BTRC will lose direct revenue from licence fees due the reduction in the number of licences but, in the long run, its indirect revenue will increase greatly alongside creation of huge employments, says the policy.