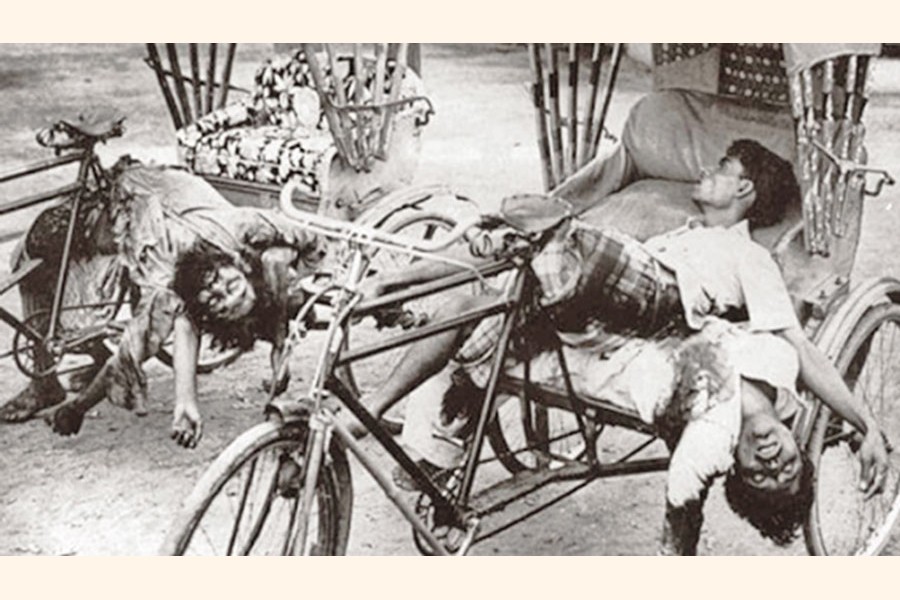 On March 25, 1971, the West Pakistan army occupation of erstwhile East Pakistan turned into a genocide. Pakistan's army unleashed a massive contingent of soldiers against Bengalis under the banner 'Operation Searchlight.' They delayed the operation until General Yahya entered West Pakistan's secure air-space after abruptly suspending tripartite-talk between Bangabandhu Sheikh Mujibur Rahman, the newly elected majority leader of Pakistan, General Yahya, non-elected President of Pakistan, and Zulfikar Ali Bhutto, the minority leader of a newly elected parliament. This tripartite-talk was a sinister move that finally turned into concerted efforts to eliminate Bengali political leaderships, intellectuals, prospective future leaders and create a 'reign of terror.' This 'reign of terror' continued until the day of independence of Bangladesh. Due to their killing orgy and attacks 3.0 million people lost their lives, two hundred thousand Bengali women were dishonored and nearly 10 million people were driven out of their homes who sought refuge in neighbouring India. Since independence, March 25 has been observed as the saddest day of the country and characterised West Pakistan's actions on March 25th as genocide. The country also approached the United Nations (UN) to declare this day as Genocide Day.

CONCEPTUAL ASPECT OF GENOCIDE: The word genocide is not a very old word. Only seventy-seven years ago, the word 'genocide' was introduced to the English language by Raphael Lemkin, a Polish-born Holocaust survivor. In 1941 he heard a radio broadcast where Prime Minister Winston Churchill was describing the horrors of World War II saying, "we are in the presence of a crime without a name." Lemkin conceptualised the planned destruction carried out by the Nazi Germans against the Jewish population in Germany and Poland and called it 'Genocide' by combining the ancient Greek word genos (race, tribe) and the Latin cide (killing). Since 1948, United Nations (UN) used this new word in the "Convention on the Prevention and Punishment of the Crime of Genocide," a treaty that was intended to prevent any future genocide. Lemkin's term genocide does not necessarily mean the immediate destruction of a nation, except when accomplished by mass killings of all members of a nation. It is intended rather to signify a coordinated plan of different actions aimed at the destruction of essential foundations of the life of national groups, to annihilate the groups themselves (Travis, Hannibal, 2012, 'On the Original Understanding of the Crime of Genocide,' Genocide Studies and Prevention: An International Journal: Vol. 7: Iss. 1: Article 6; Donna-Lee Frieze, ed., Totally Unofficial: The Autobiography of Raphael Lemkin; New Haven, CT: Yale University Press, 2013).).

This concept has given us a tool to fight a special kind of mass killing that has been perpetuated for thousands of years. However, people do have to recognise and internalize the meaning of this concept and only a well-aware mass can prevent future genocide. But political reality suggests something different, so let me elaborate on the political aspect of genocide.

POLITICAL ASPECT OF GENOCIDE: To highlight the most important political aspect I have no choice but to mention the role played by two permanent members of the Security Council-the United States of America (USA) and China; who supported the perpetrator Pakistan government's explanation of the 'Operation Searchlight' as Pakistan's "internal affairs.' As Pakistan's Yahya administration helped the US President Nixon's administration in developing diplomatic relations with China; both the great powers ignored a genocide for their immediate political gains. Fifty years ago, China which joined the Nixon administration and ignored genocide by calling it Pakistan's internal affairs is now facing President Joe Biden's accusation of committing genocide against the Muslim minorities of the Uighur province of China.

Moreover, the concept of genocide emerged out of a humanitarian crisis which was a product of political mismanagement created by the European political leaders. Many European powers allowed Adolf Hitler's arrogancy to rise through their policy of appeasement; however, ordinary people paid a high price for it. But still many countries did not learn from the history and allowed genocide to occur across the world. On March 25 of 1971 in erstwhile East Pakistan, it happened. It happened again during 1992-1995 in Bosnia. In 1994 it happened in Rwanda. The history of mankind suggests that "genocides" repeatedly took place but most of the time major countries simply stood by and barely condemn the mayhem with the expectation that the killing would be stopped. Experts believe that there have been at least 100 civil wars in this world since 1945 and most of them could be characterised as 'genocides.' Now an will move to the next section by raising one question for all: How should one characterize what has been happening against Rohingya in Myanmar.

Better than never, in 2019 in WWII Commemoration, German President Frank-Walter Steinmeier apologises to Poland for the crime German committed against the people of Poland. He recalled World War II as a 'German crime' that his nation will never forget. Many Pakistanis individually expressed their sorrows and regrets over what their past leaders did to Bengalis. But Pakistan government has yet to come publicly and apologise for the crime committed against humanity. As human beings, we need to focus on another essential aspect that separates us from other lower creatures-the moral aspect. We all morally know what is right and what is wrong; simple political gains should not override our human quality.

MORAL ASPECT OF GENOCIDE: Until March 25, 1971, an East Pakistani had the right to be a supporter of Bhutto's People's Party, Pakistan Muslim League, or even Jamat-e-Islam of Pakistan. This was the right of any individual; however, after March 25, any support toward Pakistan would be considered an immoral act. No moral code of conduct supports the killing of individuals.

The struggles of Bengalis against an unjust system for hundred years are documented. The ordinary people always stood by the right cause. The last fifty years' history also suggests that. The rise of Bangabandhu Sheik Mujibur Rahman as a charismatic leader without the support of traditional sources of power like, money, family-ties, or nobility suggests that ordinary folks of Bangladesh knew who could stand for truth.

CONCLUSION: Today is the time for Bengalis to look at the history of the March 25 attacks and also the "reign of terror" that continued until December 16, 1971, and develop a moral perspective rather than a political perspective about the whole period. This period of genocide and reign of terror should not be entangled with any other time or period. The genocide began and the freedom fight began. The main perpetrator was the Pakistan government and it has to bear the burden of committing heinous crimes against humanities and they are still answerable for those crimes. Crime against humanity does not have any statutory limit thus just a month ago a 90-year-old former Nazi concentration camp guard was deported from Tennessee to Germany to be questioned by German prosecutors whether there is enough evidence against him to bring charges. Morally this act of bringing a 90-year-old person after about 78 years for trial is not revenge but to highlight a moral standard so that others take a lesson and do not participate in crime against humanity.