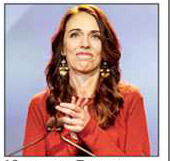 The mandate means Ardern, 40, could form the first single-party government in decades, and face the challenge of delivering on the progressive transformation she promised but failed to deliver in her first term, where Labour shared power with a nationalist party.

"This is a historic shift," said political commentator Bryce Edwards of Victoria University in Wellington, describing the vote as one of the biggest swings in New Zealand's electoral history in 80 years.