The tax revenue collection was Tk 63.78 billion higher than what the National Board of Revenue (NBR) had reported in its final estimate for the last fiscal year (FY 2020-21).

The amount finally stood at Tk 2.66 trillion, according to a latest calculation by the office of the Controller General of Accounts (CGA), which handed over the findings to the NBR's Research and Statistics Wing last week.

Official sources said that it was for the first time the CGA data showed higher actual earnings than that of the NBR calculation.

Previously, the NBR's tax collection figures were always higher than that of the CGA.

Talking to the FE, Director General of the NBR Research and Statistics Wing Md Anwar Hossain said digitization of the CGA has started paying off and the tax collection data is now being rightly compiled thanks to the ibas++.

Earlier, there were some legal flaws including the accounting system under the VAT law 1991 that used to cause leaving a large sum of revenue unaccounted for, he said. 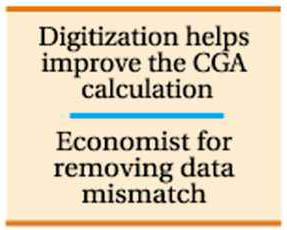 The taxmen now show what they actually earned, they said, adding that but many cases of tax deducted at source (TDS) take time to include in the final data as the tax offices are yet to come under full-fledged digitization.

The economists and researchers on different occasions expressed concern over the actual tax revenue data.

A senior NBR official said the NBR has already revised the tax collection data as per the CGA figure.

Senior research fellow of the Center for Policy Dialogue (CPD) Towfiqul Islam Khan said that it was necessary to reconcile the tax revenue collection data for framing public policies on providing subsidies for fuel, fertilisers etc.

"We're getting the final data after six months in December … it's not impossible to prepare such data within a month as ibas++ system is there," said the economist.

Unless the policymakers or researchers conduct analysis on the basis of reconciled tax collection data, framing policy to support the challenging situation would be difficult, he added.