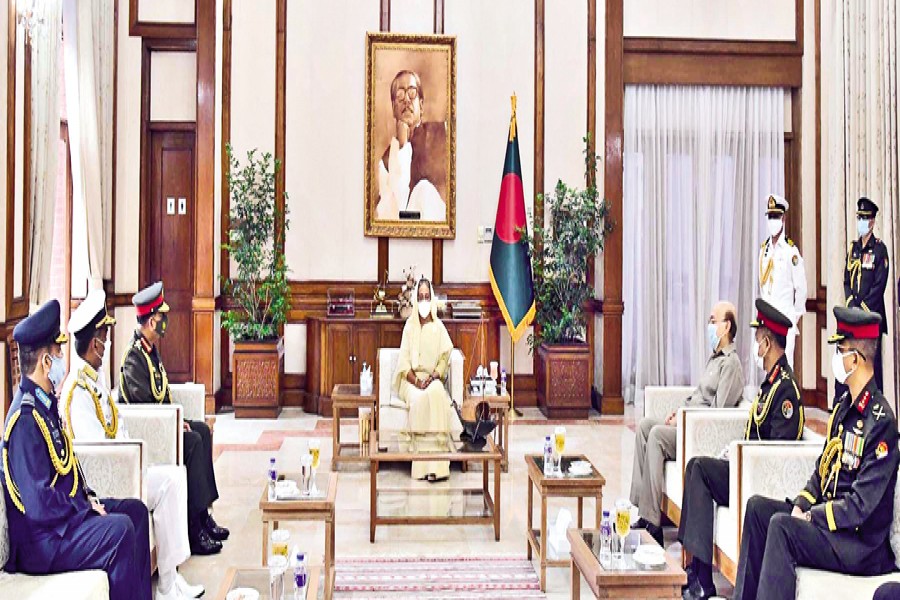 Chiefs of the three services paid a courtesy call on Prime Minister Sheikh Hasina on Saturday at her official residence Ganabhaban in the city on the occasion of the 'Armed Forces Day-2020', reports BSS.

The Prime Minister greeted all the members of armed forces and their family members on the occasion, PM's deputy press secretary (DPS) Hasan Jahid Tusher told the news agency.

Sheikh Hasina said the armed forces, which started its journey through the War of Liberation in 1971, have a lot of prideful contribution to tackling different natural calamities and facing the ongoing COVID-19 outbreak.

The premier, also in charge of defense ministry, thanked the members of army, navy and air force for their humanitarian works, evacuating various emergency patients and foreign returnees from their respective forces' position in the Corona period.

Referring to government's various initiatives undertaken to develop the three services, she said the incumbent government is working for the betterment and development of the armed forces in line with the "Forces Goal-2030" and "Defense Policy" undertaken by the Father for the Nation Bangabandhu Sheikh Mujibur Rahman.

Sheikh Hasina said the government in the last 12 years has taken all necessary steps to develop the Bangladesh Armed Forces, capable enough to face the geopolitical and military challenges of the 21st century at present.

They thanked Prime Minister Sheikh Hasina for her role in the development of the Bangladesh Armed Forces in the last 12 years of the Awami League government.

On this day, during the 1971 Liberation War, Bangladesh Armed Forces comprising army navy and air force launched an all-out attack on the Pakistani occupation forces.

After the country's independence, this historic day is being observed as the Armed Forces Day every year. But this year's programme is being celebrated in a limited scale due to COVID-19 pandemic.