Claims of capture of vote centres 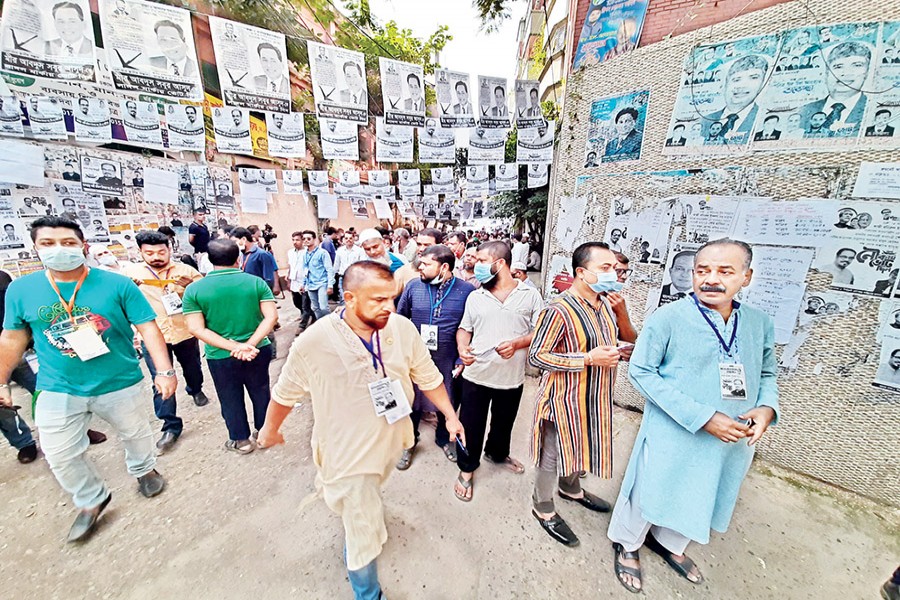 Voters line up outside the Ideal School and College polling centre at Jatrabari in the city to cast their ballots in the Dhaka-5 by-polls on Saturday — Photo: Collected

The by-election to Dhaka-05 constituency ended on Saturday amid allegations of ousting polling agents of opposition candidates from multiple centres.

Raising allegations against activists of the ruling-party candidates, opponents demanded a fresh vote for establishing voting rights of the people.

The by-poll in the constituency following the death of Awami League lawmaker Habibur Rahman Mollah began at 9:00 pm and ended at 5:00 pm without a break.

But voter turnout was found too low by the FE after visiting several polling stations in Dhalpur, Jatrabari and Demra areas.

Polling officials in these centres were seen waiting for long to serve a voter.

The rate of the vote cast was around 5.0 per cent until noon at Dhalpur Community Centre polling station, Jatrabari Ideal

Unlike supporters of opposition candidates, AL leaders and activists were seen roaming around and inside polling centres without any obstacle.

"The turnout is expected to rise in the second half as voters may come later after their work," he observed.

Only 125 out of total 3,292 votes were cast until 12:30 pm. The situation was almost same in centres like Jatrabari Ideal School and College and Matuail Adarsha High School.

No polling agent of opposition candidates was found excepting one polling booth at Jatrabari Ideal School and College.

Asma, who identified herself as a BNP candidate's agent at booth-03 of polling centre-29, remained mum when the FE asked her about the election.

Visiting election centres, BNP candidate Salahuddin Ahmed talked to the media and accused the ruling-party stalwarts of expelling his agents from polling centres.

He blamed the Election Commission (EC) for its failure to hold a free, fair and credible by-election.