The Dhaka Chamber of Commerce and Industry (DCCI) has demanded cuts in corporate tax rates in phases in the next three fiscal years (FYs) to encourage investment.

In a budget proposal for FY 2020-21, it said reductions in corporate tax rates would help capital formation, reinvestment and expansion of businesses. 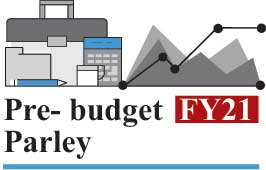 The corporate tax rate is currently 45 per cent for non-listed mobile companies.

The DCCI leaders also proposed raising the tax-free threshold for individual taxpayers in the upcoming budget, considering the higher cost of living and a declining trend in people's purchasing power.

According to the chamber body, point-to-point inflation increased by 22.59 per cent since FY '16.

They said the tax-free income ceiling for individual taxpayers should be raised to Tk 0.3 million from the current Tk 0.25 million.

DCCI leaders also suggested introduction of a new slab of the income tax rate at 5.0 per cent from the current 10 per cent to encourage people to pay tax.

The digitised system would reduce hassles and attract more taxpayers to file their returns, he added.

Mr Mahmud sought VAT rebate facility for traders who pay VAT at different rates other than 15 per cent.

He said this VAT system, without rebate off paid VAT at different rates, might fuel inflation.

As per the new VAT and Supplementary Duty Act-2012, businesses can only enjoy VAT rebate by paying 15 per cent VAT.

Other businesses paying VAT at different rates, 5.0 per cent, 7.5 per cent and 10 per cent, are not entitled to this benefit.

Mr Mahmud also suggested the NBR increase the turnover limit for small and medium entrepreneurs to Tk 40 million from the existing Tk 30 million.

For this, the DCCI chief demanded tax waiver for local manufacturers of substation machineries and other related accessories.

The DCCI pleaded with the revenue board to prepare the budget taking into consideration the impact of the coronavirus pandemic.

It also sought a 10-per cent cut in tax on the income of corporate dividend from the existing 20 per cent.

The chamber body has demanded withdrawal of advance tax on the import of raw materials and machinery used in manufacturing industries.