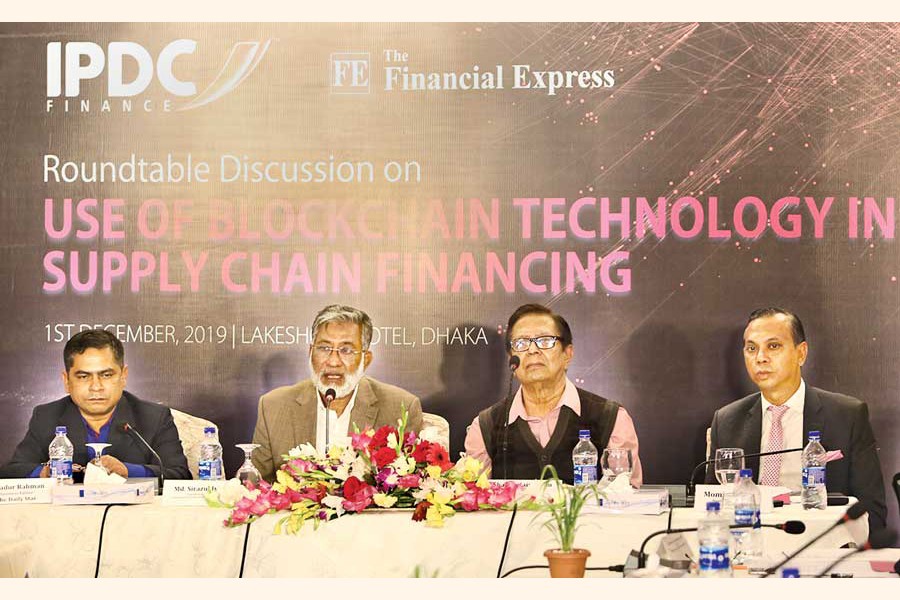 Speakers at a roundtable have called on the government to adopt blockchain technology in every sector in collaboration with all stakeholders in order to ensure transparent and efficient services.

Though this new technology has become synonymous with cryptocurrency, it has many other applications in various sectors such as banking, insurance, supply chain, payment service, real estate and healthcare, they said.

If Bangladesh cannot introduce the technology now, it would lose competitiveness in the global market, the distinguished speakers pointed out.

The use of blockchain will help uphold democracy, step up collaboration and reduce corruption and misuse of resources, they explained.

Bankers, media personalities, IT experts and top executives spoke at the roundtable entitled 'Use of Blockchain Technology in Supply Chain Financing' held at a city hotel on Sunday. IPDC Finance Limited and The Financial Express jointly organised the event.

Speaking as the chief guest, Executive Chairman of Bangladesh Investment Development Authority (BIDA) Md Sirazul Islam said there is no escape from blockchain as this technology is already there.

"You can't escape from it, you have to adopt it," he said.

"If we keep our eyes shut, it doesn't mean blockchain or the 4th industrial revolution is not coming here. Rather, it is coming," he added.

There are shortcomings and Bangladesh has to overcome them, he added.

Mr Islam said the technology should be introduced everywhere with all stakeholders on board.

"The government should introduce the technology now but not in isolation," he noted.

The use of blockchain is in a fluid state globally, with 20 per cent of global business being transacted through it, he pointed out.

The FE editor said The Financial Express will play a catalytic role in sharpening the incubation process of the technology in Bangladesh.

Welcoming the guests, he said the panellists are carefully chosen; some of whom are practitioners in the field, leading the way on the adoption of blockchain.

He said his company has grown 27 times over in the last four years through investing in the supply chain.

"We (entire market) have only utilised 2.0 per cent of market potentials of supply chain; there is unlimited potential to grow," he added.

Mr Islam said Orjon is the first-ever implemented blockchain-based digital platform for supply chain finance in South East Asia, which aims to bind the micro, small and medium enterprises (MSMEs), corporations and IPDC together to expand the financing horizon through better process visibility.

A blockchain is a database that is shared across a network of computers. Once a record has been added to the chain, it is very difficult to change. To ensure that all the copies of the database are the same, the network makes constant checks.

Blockchains have been used to underpin cyber-currencies like bitcoin, but many other possible uses in the areas such as banking and supply chain are emerging.

IPDC Finance, a non-bank financial institution (NBFI), has a plan to bring 25,000 MSMEs under its financial network in the next five years, Mr Islam said.

Small entrepreneurs can manage the loans within two to three days of submission of credit proposals in the digital system, he noted.

The IPDC MD said if the government comes forward to promote blockchain technology, it will create ecosystem favourable to the technology.

Greater benefit will come if smaller companies come forward to use blockchain, he said, adding that only big corporations' use of blockchain can't really reap the benefit of the technology.

Head of supply chain of bkash limited Mohammad Rashedul Alam said it is good for the country as much as it can adopt new technology.

Citing the example of Nokia, he said Nokia was the leading mobile phone handset manufacturer, but it was too confident and did not adopt new technologies and ultimately died away.

Revealing the reasons behind the success of bkash, he said bkash has adopted all the available updated technologies in the world and this is why bkash is the best.

Not only supply chain, but all the value chains can effectively get benefit from bloackchain technology, he added.

He said the government and media together can and should play a role for the promotion and adoption of the technology.

He urged the government to include the blockchain in the textbooks.

"It is a short term financing along the supply chain," he said.

"We have to adopt the technology and also look into the concern," he said.

Adoption of blockchain technology is a big challenge as this technology demands openness and transparency, he said.

Head of IT and Business Transformation of IPDC Aleya Rafique said three things are required for the larger adoption of technology: awareness, collaboration and resource deployment.

Without collaboration, blockchain is nothing, she said.

Manager of Unilever Bangladesh Md Abdul Alim said the use of blockchain technology will enable businesses to identify errors and reduce them significantly.

He also said it would be easier to track and trace any product in the supply chain with the use of blockchain.