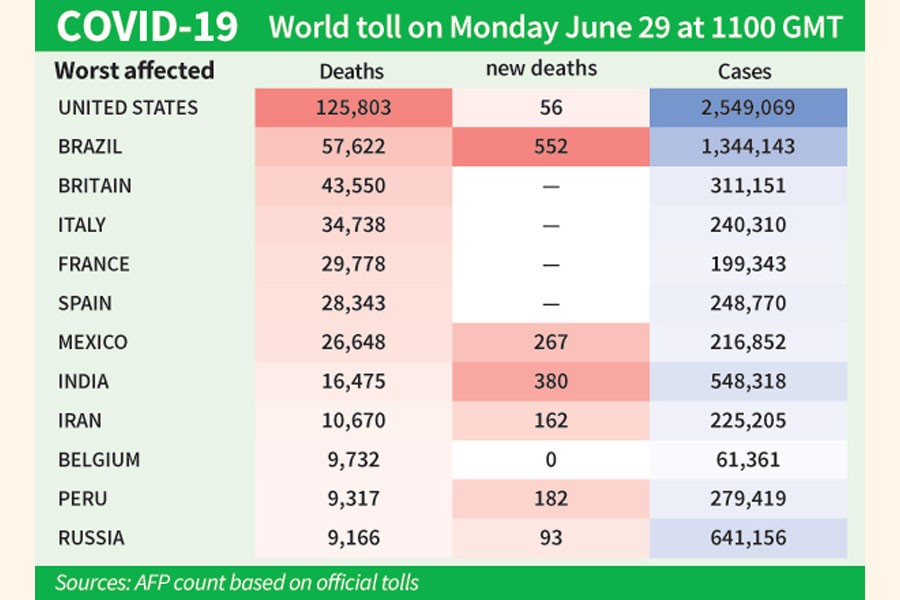 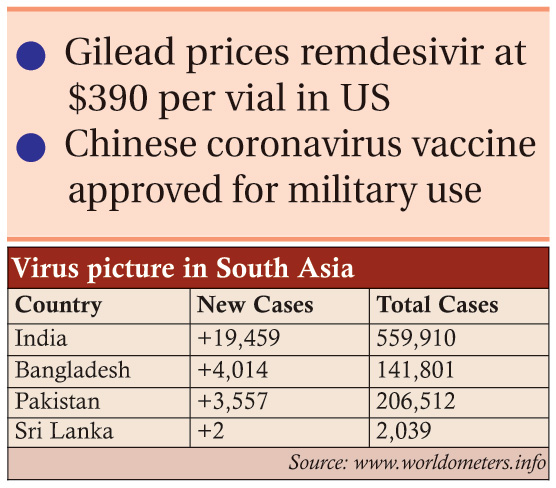 The confirmed global Covid-19 cases surpassed 10 million with over 500,000 fatalities as of Monday morning, report agencies.

Besides, over 5 million people have made recovery from the coronavirus, according to the latest tally from Johns Hopkins University (JHU).

Meanwhile, India has taken the fourth position with 528,859 confirmed Covid-19 cases. The country has so far reported 16,095 deaths.

Chinese health authorities said on Monday that they received reports of 12 newly confirmed Covid-19 cases on the Chinese mainland on Sunday, including seven domestically transmitted cases and five imported ones.

However, Gilead Sciences Inc said on Monday it has priced its COVID-19 treatment candidate remdesivir at $390 per vial in the United States and other developed countries.

Based on current treatment patterns, the vast majority of patients are expected to receive a five-day treatment course using six vials of remdesivir, which equates to $2,340 per patient, the company said.

The World Health Organisation (WHO) declared the coronavirus crisis a pandemic on March 11.

China's military has approved a coronavirus vaccine for use within its ranks that has been developed by its research unit and a biotech firm, the company said Monday.

Organisations around the world are racing to find ways to treat and prevent the deadly pathogen, which first emerged in the central Chinese city of Wuhan and has since killed over half a million people worldwide.

More than half of 17 candidate vaccines identified by the World Health Organization (WHO) that are in clinical evaluation involve Chinese companies or institutes.

Hong Kong-listed CanSino Biologics said in a filing to the stock exchange that data from clinical trials showed the Chinese military vaccine had a "good safety profile" and potential to prevent disease caused by the novel coronavirus.

CanSino said Monday that China's Central Military Commission approved the use of the vaccine on June 25, for one year.

The vaccine was jointly developed by CanSino and the Beijing Institute of Biotechnology, part of the Academy of Military Medical Sciences.

Its use cannot be expanded without further approvals, the listing said.

It was not clear how widely it would be used within China's enormous military forces, and the ministry of defence did not reply to an AFP request for further information.

CanSino added that it cannot guarantee the vaccine - which had its phase one and two clinical trials done in China - will ultimately be commercialised.

Another 131 candidate vaccines listed by the WHO are in the pre-clinical phase.

None have yet been approved for commercial use against the coronavirus.

According to medical journal The Lancet there have already been more than 1,000 clinical trials on dozens of pharmaceutical treatments for the virus but no totally effective medical intervention has been found.