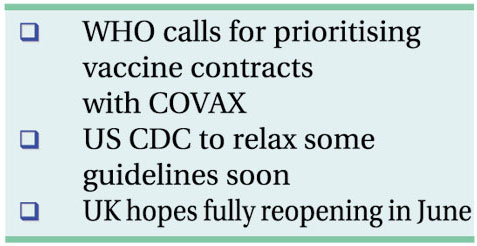 The US toll is by far the highest reported in the world, accounting for 20 percent of the nearly 2.5 million corona deaths globally, though the true numbers are thought to be significantly greater, in part because many cases were overlooked, especially early during the outbreak, reports AP.

Report from Washington adds: Top US infectious disease official Anthony Fauci on Tuesday told CNN that he expects the US Centers for Disease Control and Prevention to soon relax some COVID-19 recommendations aimed at curbing its spread for people who have been vaccinated.

"I believe you're going to be hearing more of the recommendations of how you can relax the stringency of some of the things, particularly when you're dealing with something like your own personal family, when people have been vaccinated," Fauci said, adding he expected the new guidance "pretty soon."

Another report from London adds: British Prime Minister Boris Johnson said on Tuesday that he was very optimistic that all COVID-19 restrictions in England would end on June 21, and added that the government would hold a review into the use of vaccine certificates.