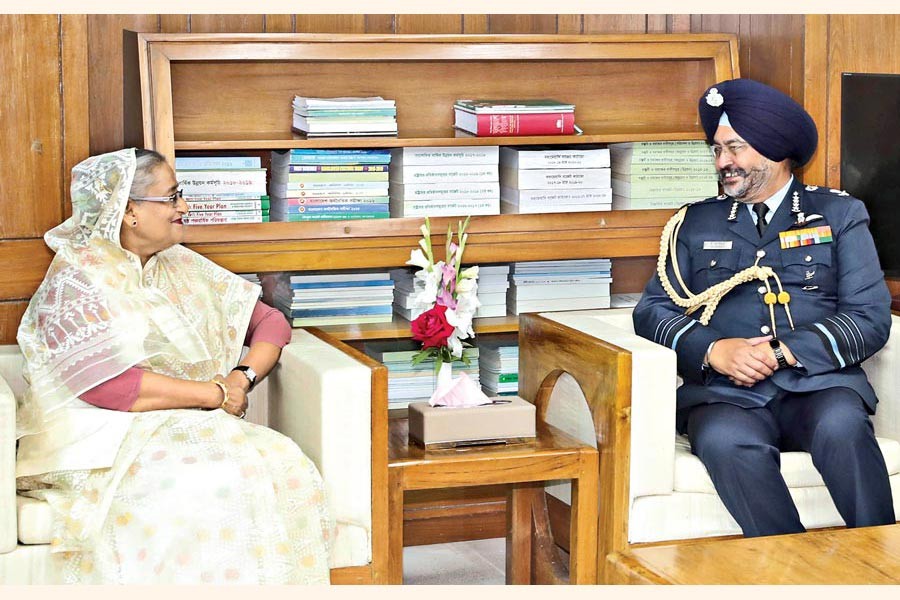 Visiting Indian Air Chief Marshal Birender Singh Dhanoa said on Monday the air forces of Bangladesh and India can work together during any disaster, reports UNB.

He made the proposal at a meeting with Prime Minister Sheikh Hasina at her Jatiya Sangsad Bhaban office.

Birender Singh mentioned the cooperation between the two air forces in many areas and the exchange of training programmes, saying the Indian Air Force is ready to help build the capacity of Bangladesh Air Force.

He praised the infrastructure of Bangladesh Air Force terming it a 'world-class' one and expressed his happiness that Prime Minister Sheikh Hasina invites war veterans of 1971 from Indian every year.

Noting that the Indian troops had returned from Bangladesh within a short period of three months after the 1971 Liberation War, the Indian Air Force chief said this is an example in the world.

Birender Singh, who is visiting Bangladesh for the third time, praised the total development of Bangladesh and said the country made huge progress in many areas.

Mentioning Bangladesh's success in its readymade garment sector, he said he finds 'Made in Bangladesh' tag whenever he buys cloths outside India.

The Prime Minister recalled Indian support extended to Bangladesh during the 1971 Liberation War.

She termed the existing relations between Bangladesh and India 'wonderful'.

Father of the Nation Bangabandhu Sheikh Mujibur Rahman dedicated his life to the services of the people, said the Prime Minister.

Sheikh Hasina said her government has relentlessly been working for the country's development from the grassroots level. "The people will surely enjoy the fruits of development," she added.