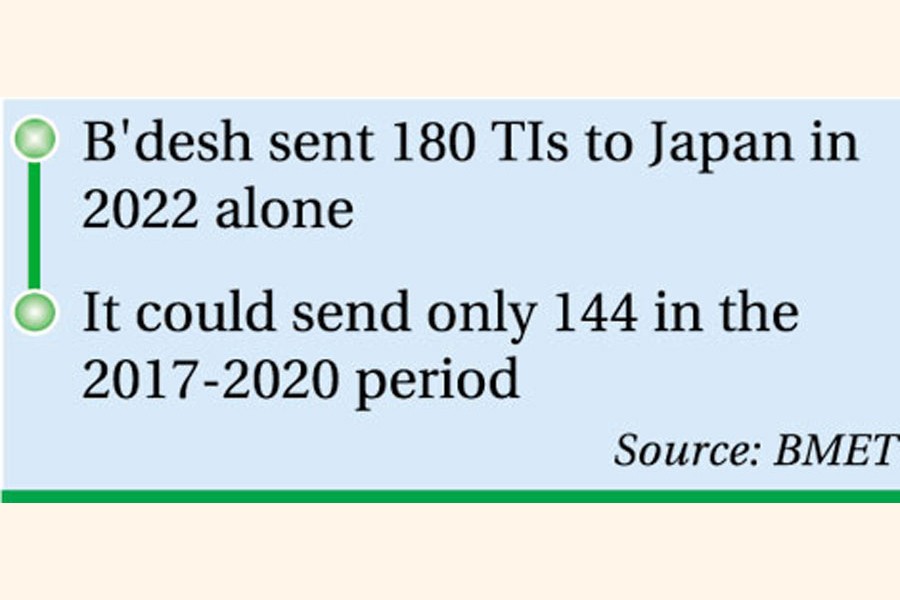 Japan has expressed its willingness to hire more technical interns (TIs) from Bangladesh.

A visiting team of the International Manpower Development Organisation of Japan (IM Japan) has expressed eagerness during a recent meeting with the Bureau of Manpower Employment and Training (BMET).

IM Japan has also set SSC (secondary school certificate) qualification as a minimum requirement for the TIs instead of HSC (higher secondary certificate) - however, this will only be allowed on an experimental basis for one Technical Training Centre (TTC) located in Tangail.

The course of training for Japan-bound TIs is set to start in Tangail under the new arrangement from February 1.

"If the SSC qualified candidate can perform well in this profession, the IM Japan will lower the qualification for all TTCs in the country," said Md Salah Uddin, director (training operations) of the BMET.

If Bangladesh can send TIs with the SSC qualification, the outflow of TIs will increase in the coming days, he observed.

"Now they want to recruit more TIs from Bangladesh," he said, adding that the outflow of Bangladeshi TIs has increased significantly since last year.

Japan hired 180 TIs from Bangladesh in 2022 alone - this figure is higher than the total number of TIs Bangladesh sent in the previous three years.

The Ministry of Expatriates' Welfare and Overseas Employment of Bangladesh and IM Japan signed an instrument in 2017 to hire TIs from Bangladesh.

Bangladeshis find jobs as TIs mainly in the construction and automobile sectors of Japan.

A 22-member delegation of IM Japan arrived in Bangladesh for a six-day visit on January 21.

They have visited two TTCs in Sylhet and Manikganj.