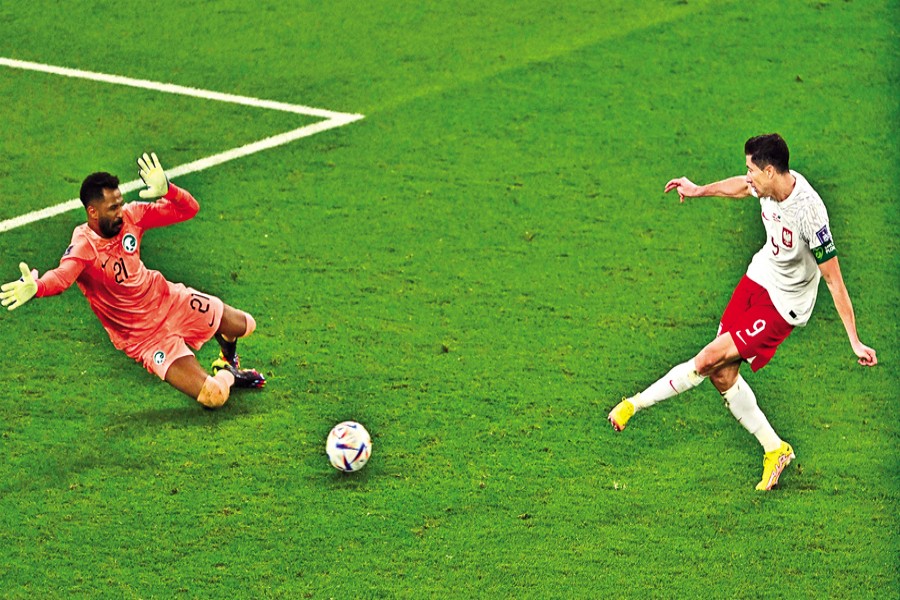 DOHA, Nov 26 (AFP): Robert Lewandowski scored the first World Cup goal of his prolific career on Saturday when he netted in Poland's 2-0 win over Saudi Arabia, bursting their bubble following the team's giant-killing act against Argentina.

Barcelona forward Lewandowski made sure Poland took a big step towards the last 16 in Qatar when he rolled home in the 82nd minute after being gifted the ball by Abdulelah Al-Malki.

However it was a battle for Czeslaw Michniewicz's side, who were leading at that point thanks to Piotr Zielinski's roofed finish and an incredible double save from Wojciech Szczesny after Salem Al-Dawsari's penalty late in the first half.

Egged on by a vocal crowd, Herve Renard's Saudi team came out with the bit between their teeth and the Poles frequently struggled to handle their aggressive press.

Mohamed Kanno had the game's first decent effort on goal, tipped over by Szczesny in the 13th minute.

Lewandowski initially found it hard to get into the game as he was immediately surrounded by a gang of defenders led by Ali Al-Bulayhi, who at one point looked to be heading out of the game after being accidentally studded by the Barca star.

Lewandowski played a key role in Poland's opener against the run of play in the 39th minute, pulling back for Zielinski to finish after nearly clipping home his first World Cup goal.

Szczesny then stepped up to save his team minutes later after referee Wilton Sampaio awarded a soft penalty, when Saleh Al-Shehri went down heavily under pressure from Krystian Bielik.

The Juventus goalkeeper did well to bat away Dawsari's nervy spot-kick but the ball fell to Mohammed Al-Burayk, who was denied on the rebound by a sensational stop.

Szczesny was again Poland's saviour nine minutes after the break when he charged off his line to keep out Dawsari following a chaotic passage of play that ended with the ball being ballooned over the bar.

Poland were again close to buckling under intense Saudi pressure but should have been further ahead midway in through the second half when Arkadiusz Milik and Lewandowski both struck the woodwork in the space of three minutes.

Malki then scuffed wide from the edge of the box and it was his mistake that allowed Lewandowski to seal the points.

Nothing looked on when Malki received a pass on the edge of his own area but he let the ball slip past him and right into Lewandowski's feet, allowing him to roll in a simple finish and end his hoodoo.