IMED suggests special efforts to launch it by 2021 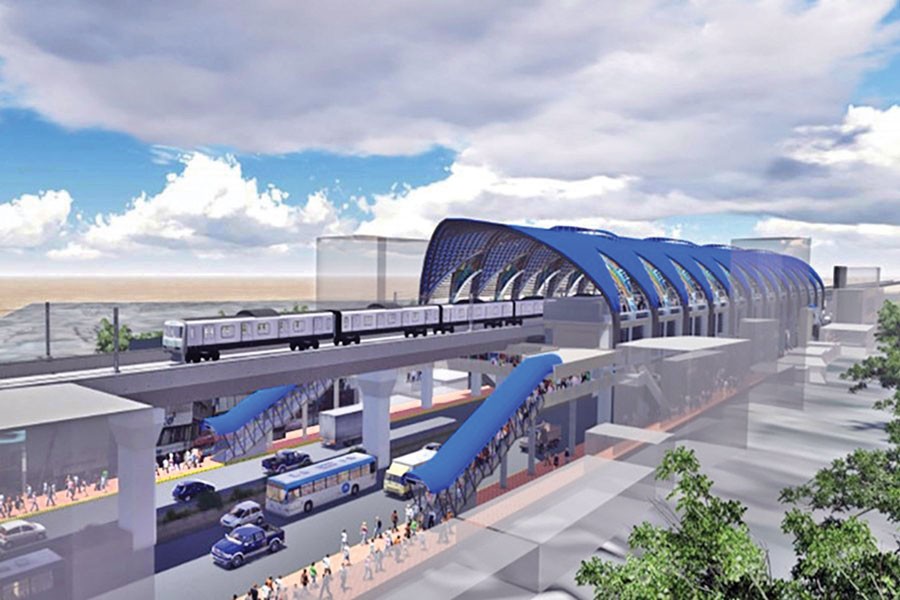 Progress of the country's first metro-rail project (MRT-6) has fallen short of the respective target by some 18 per cent until last month (April), following the lowest implementation rate in the current year, officials said on Monday.

The slow progress of the 20.1-km metro-rail construction work is likely to delay its launching by 2021, although the government expects to inaugurate the line on the occasion of 50th anniversary of Bangladesh's independence.

According to a government monitoring report, the Dhaka Mass Transit Company Limited (DMTCL) has implemented 28.90 per cent of the Dhaka Mass Rapid Transit Project (MRT-6) until April against the set target of 46.42 per cent.

"Since the MRT-6 construction under the packages five and six started late, the project's overall progress is still lower than the target. Its progress is expected to get momentum from the next fiscal year, 2019-20" said a senior official at the Ministry of Road Transport and Bridges.

He also said the government is giving its highest effort to complete the metro-rail from Uttara to Motijheel on the occasion of the country's 50th anniversary of independence.

The Implementation Monitoring and Evaluation Division (IMED) has conducted an in-depth study on the MRT line-6 project. There it found that the DMTCL has not been able to implement its targeted 46.42 per cent of the total work until last month.

The report said it will be difficult to inaugurate the metro-rail by 2021, if special efforts to complete works under all packages are not given by the contractors as well as by the implementing agency.

The government approved the project in July 2012 at a cost of Tk 219.85 billion with the financial support of Japan, giving the highest priority to it by enlisting in the highly supervised "fast-track" project list.

In the first phase, the DMTCL started work to build an 11.29-km MRT line between Uttara and Agargaon under the CP-3 and CP-4 packages from the middle of 2017 with an aim to complete its construction by December 2019.

The IMED monitoring report said the contractor of the CP-3 and CP-4 packages - the Italian-Thai Development PLC - has completed only 39.50 per cent of the physical work until April 2019.

Under the packages, the Thailand-based contractor has installed 264 piers out of the total 393, 81 station I-girders out of 108, and some 3.0 km long viaducts between Uttara and Motijheel.

Besides, the contractor Tekkon-AML-Abenikko JV has completed only 7.5 per cent of the physical work until last month under the CP-5 package.

It has so far completed 86 pilling out of 556 from Agargaon to Farmgate until April, the IMED report noted.

Under the CP-6 package, the SMCC-ITD JV has completed 124 pilling out of 692 between Kawran Bazar and Motijheel until last month.

According to the deals, the contractors of CP-5 and CP-6 packages are supposed to complete their work by December 2020.

The CP-1 package ended in January 2018, as the contractor Tokyu Construction Co Ltd finished land development for the depot at Uttara.

Under the CP-2, the contractor ITD-Sinohydro JV has completed 30 per cent of the physical work for civil and building construction in the deport area at Uttara.

Meanwhile, the Japanese company Kawasaki-Mitsubishi Consortium has completed nearly 14 per cent of the work under the CP-8 package for producing railway coaches in Japan.

Under the CP-7 package, the Marubini-Larsen and Toubro JV has completed 8.0 per cent of the electrical and mechanical system until April.

According to the deal with the DMTCL, the CP-7 and CP-8 packages are supposed to be completed by December 2020.

The Japan International Cooperation Agency (JICA) is providing loan amounting to nearly US$ 2.10 billion for constructing the MRT-6.