No headway in lifting anti-dumping duty yet

Two months on, Delhi yet to respond to Dhaka's letter 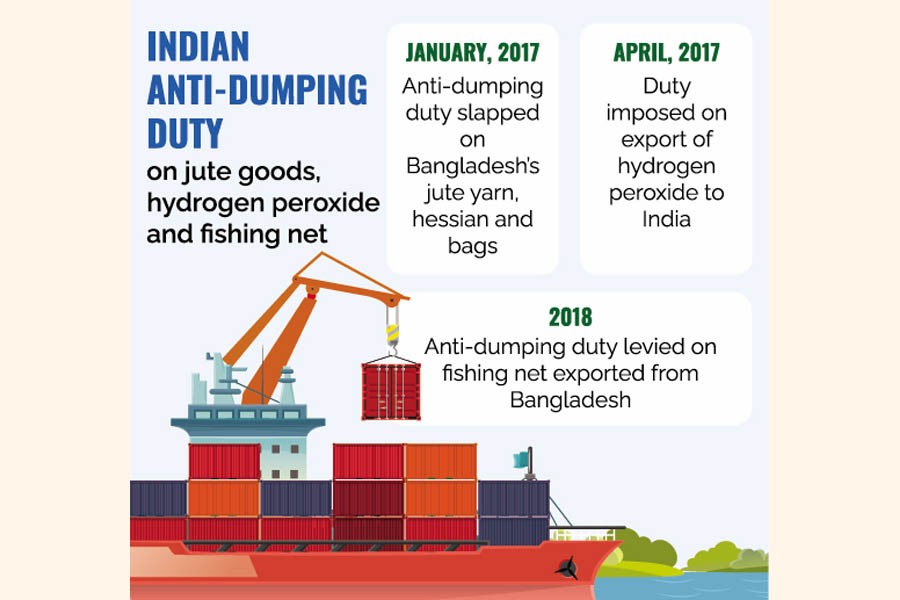 There is no development regarding lifting anti-dumping duty on Bangladeshi goods in Indian market and Dhaka is yet to hear from New Delhi despite sending a letter in this regard two months back, officials said.

After the bilateral commerce secretary level meeting held in early March, Bangladesh sent a letter, as decided in the meeting, to India.

However, according to commerce ministry officials, the Indian side is yet to respond.

"We have not received anything after sending the letter," a commerce ministry official told the FE on Monday.

The issue was scheduled to be discussed during Indian prime minister's Dhaka visit in late March, but "I am not sure if anyone discussed it", said the official, seeking anonymity.

Additional Secretary of the Ministry of Commerce Shahidul Islam told the FE that Bangladesh had requested India to act in line with the relevant rules of the World Trade Organisation (WTO).

"They should not go beyond WTO rules in bilateral trade dispute resolution," he said.

In the last commerce ministry level meeting, the Bangladesh side argued that the anti-dumping investigations were not conducted in line with the WTO rules -so the duty should be withdrawn immediately.

"…since the investigation itself was not consistent with the WTO, these (the three options offered by India) could not be considered as viable options," the Bangladesh side told the meeting.

However, Bangladesh found this offer inconsistent with the WTO rules and did not accept it.

After that, the Bangladesh side proposed seeking opinions from the WTO dispute settlement body to resolve the issue.

However, India turned down the plea saying that its domestic law does not permit it to examine the issue by a third party.

India slapped anti-dumping duty on jute goods, hydrogen peroxide, and fishing net back in 2017 and afterwards.

The anti-dumping duty on Bangladesh's jute yarn, hessian and bags, ranging between US$19 and $352 per tonne, was imposed in January 2017.

A similar duty, ranging between $27.81 and $91.47 per tonne, was slapped on export of hydrogen peroxide to India from Bangladesh in April 2017.

In 2018, India also put anti-dumping duty, $2.69 per kilogramme, on fishing net, exported from Bangladesh to its domestic market.

Export of these items to India fell gradually since then and Bangladesh's continued efforts to remove the duties went in vain.