Over 92m infected globally as death toll rises to 1.97m 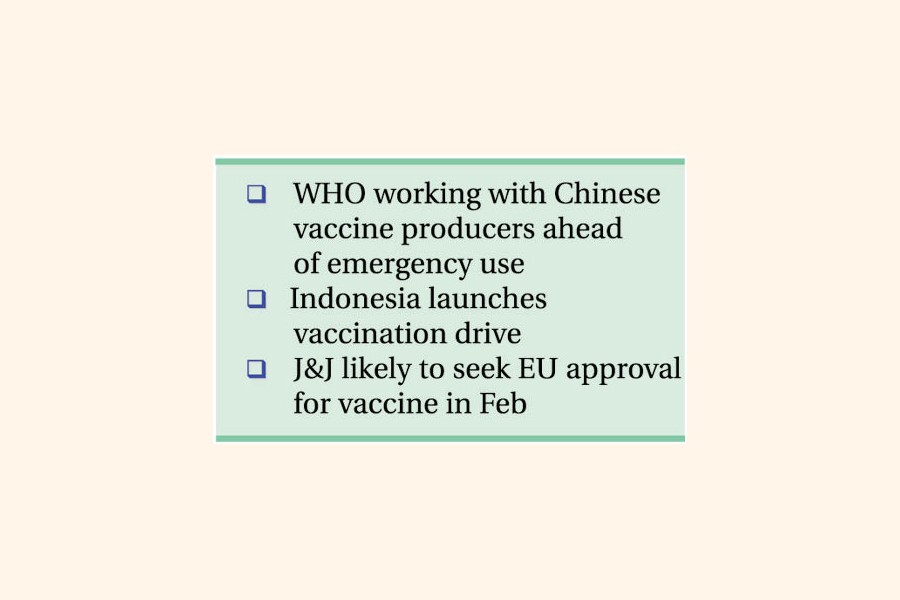 The global Covid-19 caseload has surpassed 92 million, while the deaths have surged to more than 1.97 million, according to Worldometers tally, report agencies.

The total number of cases globally stood at 92,148,761 and the death toll at 1,973,486 as of Wednesday morning, as per the latest data released by the university.

In the US, the world's worst-hit country, the infection tally is nearing the grim milestone of 23 million.

The country's total caseload reached 22,836, 244, while the death toll climbed to 380,651 this morning, the university said. Deaths nationwide are running at more than 3,200 a day on an average.

More than 9.3 million Americans have received their first shot of the Covid vaccine, according to the Centers for Disease Control and Prevention, a slow rollout for a campaign that will have to inoculate perhaps 85% of the population, or close to 300 million people, to conquer the outbreak, reports AP.

Brazil registered 1,110 deaths from Covid-19 in the past 24 hours, bringing the national death toll to 204,690, the Ministry of Health announced on Tuesday.

Meanwhile, Indonesia launched one of the world's biggest COVID-19 vaccination campaigns on Wednesday with President Joko Widodo getting the first shot of a Chinese vaccine as his country fights one of the worst coronavirus outbreaks in Asia.

The drive aims to inoculate 181.5 million people, with the first to be vaccinated receiving the CoronaVac vaccine from China's Sinovac Biotech, which Indonesia authorised for emergency use on Monday.

Dressed in a white shirt and wearing a mask, the president, who is known as Jokowi, got his shot at the presidential palace.

Report from Geneva adds: The World Health Organization (WHO)

Director-General Tedros Adhanom Ghebreyesus has said that a WHO team in China is working with producers of the Sinovac and Sinopharm vaccines for potential emergency use listings.

"I'm pleased that a WHO team is in China currently working with producers of the Sinovac and Sinopharm vaccines to assess compliance with international quality manufacturing practices ahead of potential emergency use listing by WHO," Tedros said at a recent media briefing.

organization to consider them for emergency use listings.

Another report from Brussels adds: US firm Johnson & Johnson is likely to apply for EU approval for its COVID-19 vaccine candidate in February, a top lawmaker said on Wednesday.

Clinical data of the vaccine, which Johnson & Johnson is developing through its subsidiary Janssen, have been assessed by the European Medicines Agency (EMA) since Dec. 1 under a rolling review to speed up possible approval.

"EU Health Commissioner Stella Kyriakides announced during our (EU lawmakers) group meeting this morning that the vaccine manufacturer Johnson & Johnson is likely to submit an application for approval to the EU for their vaccine in February," said Peter Liese, who represents health matters for the EU's centre-right group, the assembly's largest.

A spokesman for Kyriakides said later on Wednesday: "We cannot give any precise indications regarding an application for conditional marketing authorisation, but we of course hope that an application could be submitted in the coming weeks."

Johnson & Johnson and EMA did not immediately respond to a request for comment.