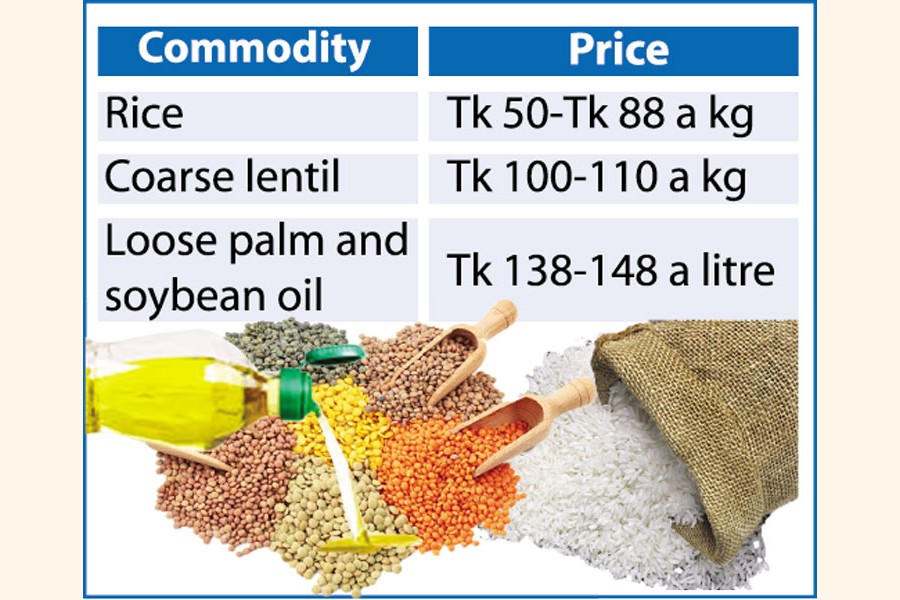 All varieties of rice witnessed Tk2.0-4.0 a kg hike further in a week battering the commoners as the coarse varieties were traded at Tk50-52 and the medium varieties at Tk56-60 a kg on Friday.

Finer rice varieties including jeera, miniket, BRRi dhan 49/Nazirsail sold at between Tk66 and Tk 88 a kg depending on brands and quality.

Hoarding by millers and traders amid upsurge in Covid cases, high import duty as well as mounting transport costs were key reasons for the hike even during this peak Aman harvest and trading season, said insiders.

According to the grocers, bottled soybean oil, which is now static at previous high of Tk158-160 a litre, will also be pricier by Tk8.0 within a few days as per the instruction of sales representatives of the refiners.

The refiners have decided to sell bottled soybean oil at Tk168 a litre from January 8 after placing a proposal to the commerce ministry, according to the Bangladesh Vegetable Oil Refiners and Vanaspati Manufacturers Association (BVORVMA).

Coarse lentil price shot up to Tk105-110 a kg from Tk90-95 a kg intensifying sufferings of the poor.

Consumers Association of Bangladesh secretary Humayun Kabir Bhuiyan told the FE that leaving costs have risen notably in last one year when people have witnessed decline in their income for the pandemic.

He said the government should withdraw all kinds of import duty from the products like edible oil and rice to prevent the hidden hunger prevailing across the country.

He also lambasted the refiners for raising prices of the products, further saying it could force many low-income people to stop consuming the items. Mr Bhuiyan also demanded expansion of the open market sale (OMS) of the key essential items across the country to help the poor survive.