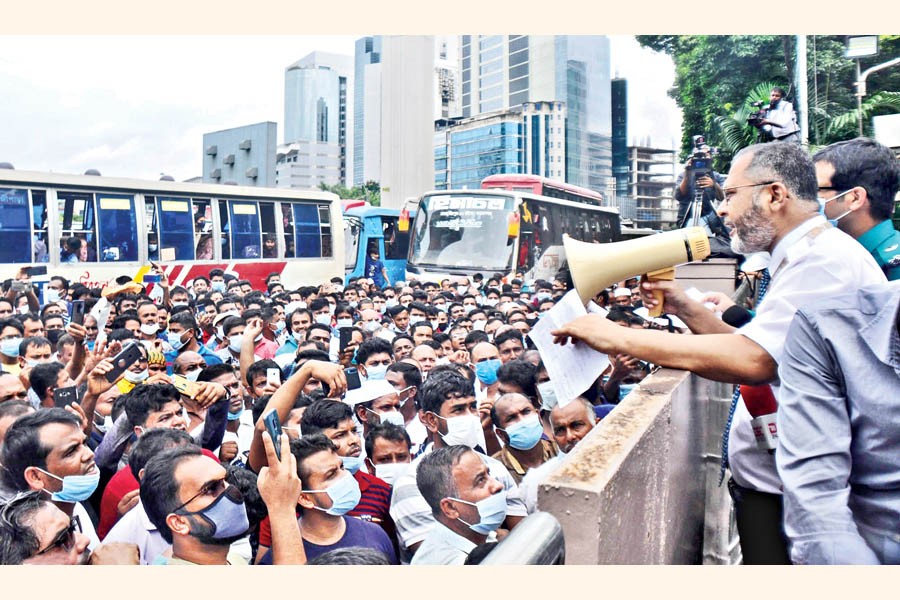 Desperate to go back to their workplaces in Saudi Arabia, returnee migrant workers continue to gather in front of the office of the Saudi Arabian Airlines in Karwan Bazar area of the city on Thursday to collect air tickets — Focus Bangla

Rezaul Karim, a migrant worker from Gaibandha, got his ticket at the counter of the national carrier of Saudi Arabia at Pan Pacific Sonargaon Hotel in Dhaka's Karwan Bazar on Thursday afternoon.

Rezaul had returned home in March on a two-month holiday, but he got stranded due to the suspension of flights amid the coronavirus pandemic.

He had bought a return ticket for 2,200 riyal and now the airlines has extended its validity without charging him an additional fee.

Rezaul said he got the ticket after a three-day wait and now he cannot go home as the flight is on next Saturday.

He will stay at a Dhaka hotel and undergo coronavirus test in the capital as per requirements set by the Saudi authorities.

Khorshed Alam from Noakhali said he had spent the days amid the pandemic in great distress after returning home eight months ago.

"I had to borrow from my relatives. Now I can pay them back once I get to Saudi Arabia," he said.

Another Bangladeshi expatriate, Mizanur Rahman, said his past few days were filled with anxiety and uncertainty.

Jahidul Abedin, the manager of Saudia's CTO reservation unit, said they are not issuing new tickets, only reissuing the old ones.

"We've got a handle on the situation. The travellers can go to Saudi Arabia now," he said.

More than 2 million Bangladeshi expatriates work in Saudi Arabia. Nearly half of the $18.2 billion remittances received by Bangladesh in 2019-20 fiscal year came from the Middle-Eastern kingdom.

After the Saudi authorities had denied Biman the permission to operate commercial flights to the kingdom, Bangladeshi passengers turned up the heat on Saudia.

But it appeared difficult for Saudia to tackle the pressure alone.

A group of disgruntled Bangladeshi migrants who work in Saudi Arabia demonstrated outside the Saudia office on Tuesday. They protested outside the Ministry of Expatriates' Welfare and Overseas Employment in Dhaka's Eskaton on Wednesday when Saudia stopped selling tickets.

Before Momen's announcement, Biman also decided to operate special flights on Sep 26 and 27 to Jeddah and Riyadh for those who had booked return tickets for Mar 16 and 17.

Mokabbir Hossain, the managing director of Biman, told bdnews24.com on Thursday that they will operate special flights to the Saudi cities on Sep 29 and 30 for the travellers who had booked return tickets between mar 18 and 20.

The ticket holders need to contact Biman's sales office on Sep 25 and 26.

The bookings will be renewed on a first-come-first-serve basis, Mokabbir said.

"The other travellers will be informed about the bookings gradually in line with the approval of flights," he said, urging the travellers not to crowd the counters.