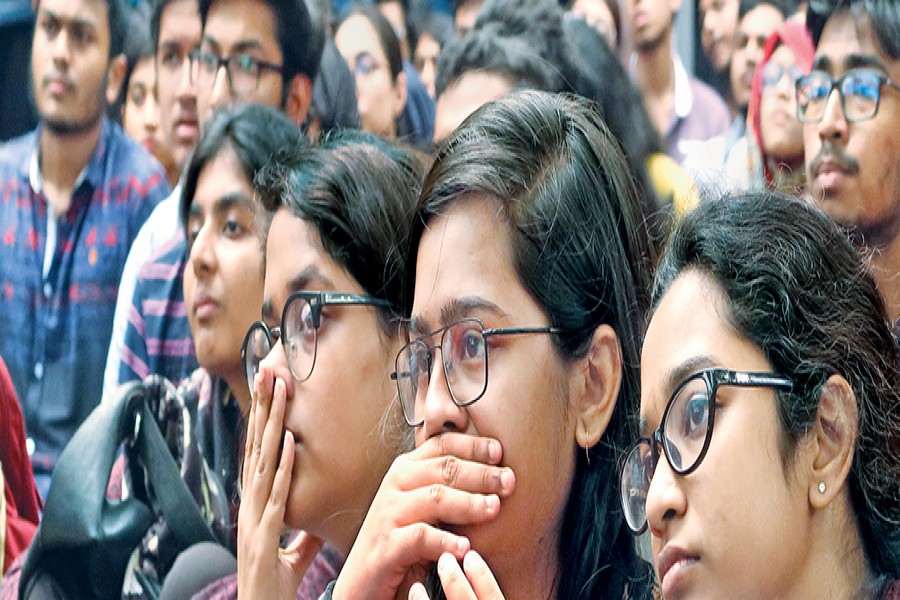 Students of the Bangladesh University of Engineering and Technology (BUET) placed a fresh 10-point demand, including expelling Abrar's killers, as protest over the brutal killing started spreading across the country on Wednesday.

Meanwhile, Provost of the BUET's Sher-e-Bangla Hall Muhammad Zafar Iqbal Khan resigned from his post on Wednesday afternoon, acknowledging his failure. President of the BUET Teachers' Association (BUET TA), Dr A K M Masud disclosed it to the students.

The BUET TA also demanded resignation of Vice-Chancellor (VC) Prof Dr Saiful Islam, and threatened that if he does not resign, they will press for his removal.

The association called a general meeting on the issue at 10:30 am, and decided to recommend banning student and teacher politics on the campus.

Earlier, the agitating students, under the banner of General Students of BUET, gathered in front of the institution's Shaheed Minar at 10.00 am on the day, and vowed to continue agitation for the third consecutive day until their demands are met. 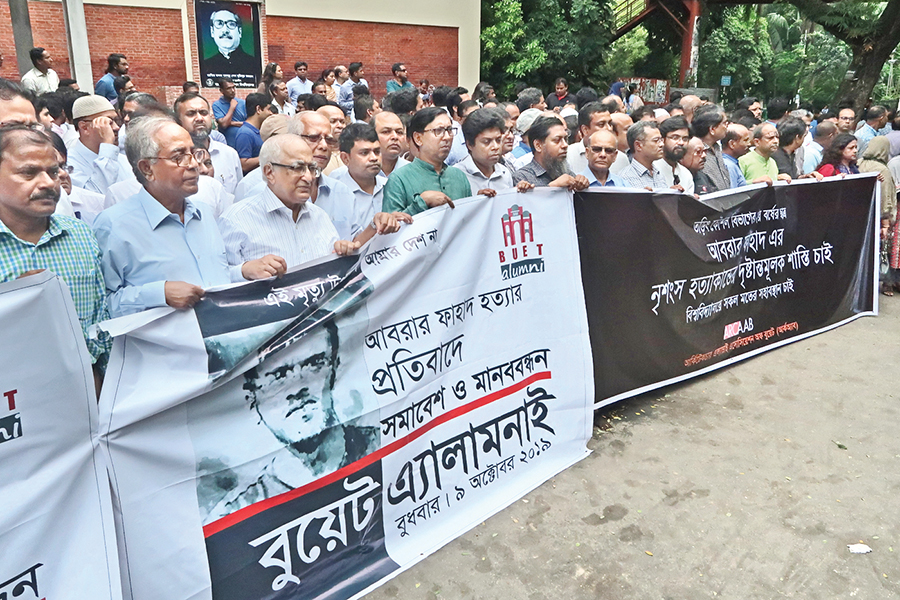 They were chanting slogans, demanding justice for the killing of Abrar, and also placed some demands.

Their demands include ensuring the highest punishment for the killers, permanent expulsion of the identified killers from the BUET within October 11, providing expenditure for conducting the case to the victim's family by the BUET administration, fast conducting of the case under Speedy Trial Tribunal, publishing copy of the charge-sheet officially as soon as possible, and banning student politics on the campus within October 15.

Besides, they also demanded explanation from the VC within 2.00 pm on Wednesday about why he refrained from being present on the campus after 30 hours of the killing and why after coming he left the place without giving proper answers, ending physical and mental tortures on students under the name of ragging, establishing a platform where students can place complaints regarding such tortures so that the authority can take steps immediately, and resignation of the Sher-e-Bangla Hall provost.

Among the demands, the VC did not meet them within the stated time, and the hall provost resigned from his post.

Meanwhile, the BUET Alumni Association also demanded resignation of the VC, and announced eight-point demands. President of the association Prof Dr Jamilur Reza Chowdhury announced the demands after a procession.

Meanwhile, the students' protest started spreading all over the country on Wednesday. The students of other institutions, like - the Dhaka University (DU), the Jahangirnagar University, the Rajshahi University, and the Jagannath University, protested on their respective campus, demanding justice of Abrar's murder.

They brought out a protest rally with black flags from Raju Sculpture on the DU campus and went to the BUET campus by parading several streets.

'White Group', a teachers' group at the DU - backed by Bangladesh Nationalist Party (BNP) and Jamaat-e-Islami, formed a human-chain on the DU campus, demanding justice of the brutal killing. Jatiyatabadi Chhatra Dal (JCD) also brought out a protest rally on the campus.

Meanwhile, three more students of the BUET were placed on a five-day remand in connection with the Abrar murder.

Metropolitan Magistrate Tofazzal Hossain passed the remand order when Wahiduzzaman, an inspector of the Detective Branch (DB) of police and investigation officer of the case, produced the trio before the court with a 10-day remand prayer.

Abrar Fahad, a second-year student of EEE Department, was beaten to death allegedly by some BCL leaders at the university's Sher-e-Bangla Hall sometime between 8:30 pm Sunday and 2:30 am Monday.

Meanwhile, International community on Wednesday expressed deep concern over the gruesome murder of Abrar Fahad, a student of Bangladesh University of Engineering and Technology (BUET).

The UN and the UK in separate statements condemned the horrific killing of the student at the dormitory of the BUET in Dhaka,

The EU and the UK also called upon the authorities to investigate and bring the perpetrators to book in a fair and neutral manner.

"The UN deplores the killing of a young BUET student, allegedly for freely expressing his views. Campus violence in Bangladesh has over the years affected and claimed too many lives, with apparent impunity for those bearing responsibility," the intergovernmental organisation said.

"The UN Bangladesh notes steps taken by the authorities to apprehend alleged perpetrators. It encourages independent investigations that should lead to justice being served in a fair process, and measures to ensure prevention of further incidents," said the UN statement.

"Freedom of speech is a human right, and nobody should be harassed, tortured or killed for exercising it, "the UN said.

Later, addressing a programme Mia Seppo, the United Nations Resident Coordinator (UNRC), termed the incident a 'horrific nightmare' and felt that every parents want safe and secured environment on a campus where their children go for study.

The programme was organised by the Diplomatic Correspondents' Association of Bangladesh.

"We are very shocked and saddened by the incidents that took place in BUET. We called upon the authorities to investigate and bring the perpetrators to justice. A statement has already been issued from UN in this regard," Mia Seppo said.

The British High Commission in a post on Facebook on Wednesday said: "Shocked and saddened by events at BUET. The UK stands unconditionally for free speech, media freedom, human rights and the rule of law."

Abrar, a second-year student of Electrical and Electronic Engineering Department of BUET, was beaten to death allegedly by some Chhatra League men brutally at a dormitory of the university between 7:00 pm Sunday and 2:30 am on Monday.