Trade unionists have called upon the Canadian brands and retailers to commit for paying living wages and endure other vital supports to the impoverished readymade garment (RMG) workers in their supply chains.

The independent trade union federations representing the garment workers in Bangladesh, together with their international allies, also urged them to establish a global severance guarantee fund to support the garment workers affected by the Covid-induced factory closure.

The plea came based on a new report that claimed links between Canadian retailers and specific garment factories in Bangladesh that trap workers - primarily women.

Steelworkers Humanity Fund, a registered charity, launched the report titled 'Not Even the Bare Minimum' on March 22 last.

The report links Canadian retailers like Joe Fresh, Lululemon, Mark's and others to specific poverty-wage garment factories in Bangladesh. 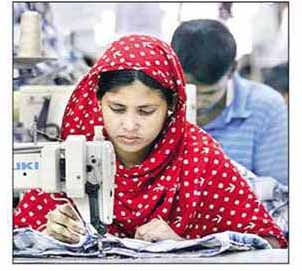 The Fund commissioned a researcher in Bangladesh to interview garment workers and to examine their working conditions.

The Bangladeshi factories were identified through public disclosure by the brands themselves and by tracing shipments through data available from a commercial importation database.

The report quoted a worker from Standard Stitches that produces for Mark's as saying "You work and you work, six days a week, 12- to 15-hour shifts, thinking your luck will change. Thirty years and I still constantly worry about when I will get my next paycheque, whether I will have enough money this month."

The report quoted a female garment worker at YoungOne (CEPZ) Ltd that supplying Lululemon saying: "When I see the children's faces, when I serve them the food, my heart breaks. I am working as hard as I can, but what's the point if I can't even feed them properly?"

"Canadian brands have been largely silent on their responsibility to respect the human right of workers to decent work throughout their supply chains," Ken Neumann, president of the Steelworkers Humanity Fund and National Director of the United Steelworkers Union (USW), said in a statement.

"It is time for Canadian brands to publicly acknowledge that they have a responsibility for workers employed in their supply chains and to make credible commitments to paying living wages not only in Bangladesh, but throughout their global supply chains," Neumann said.

There is a desperate need for Canadian retailers and brands to defend workers in their supply chains who face constant "anti-union tactics and rights violations", said Kalpona Akter, executive director of the Bangladesh Centre for Worker Solidarity and president of the Bangladesh Garment and Industrial Workers Federation.

"Every day we are confronted by the desperation, heartbreak, anger, as well as courage of workers trapped in poverty," she added.

"Canadian companies have a responsibility to workers in their supply chain to pay living wages, respect workers' rights, and to cushion the impact of Covid-19 and make sure workers and their families survive," she noted.

In addition to a commitment to paying living wages, the report called on Canadian retailers and brands to contribute to a severance guarantee fund, financed by a price premium paid by brands on future orders, to support garment workers affected by the pandemic-related factory closures.

The pandemic has had a dramatic impact on garment exports to Canada in 2020, according to the report.