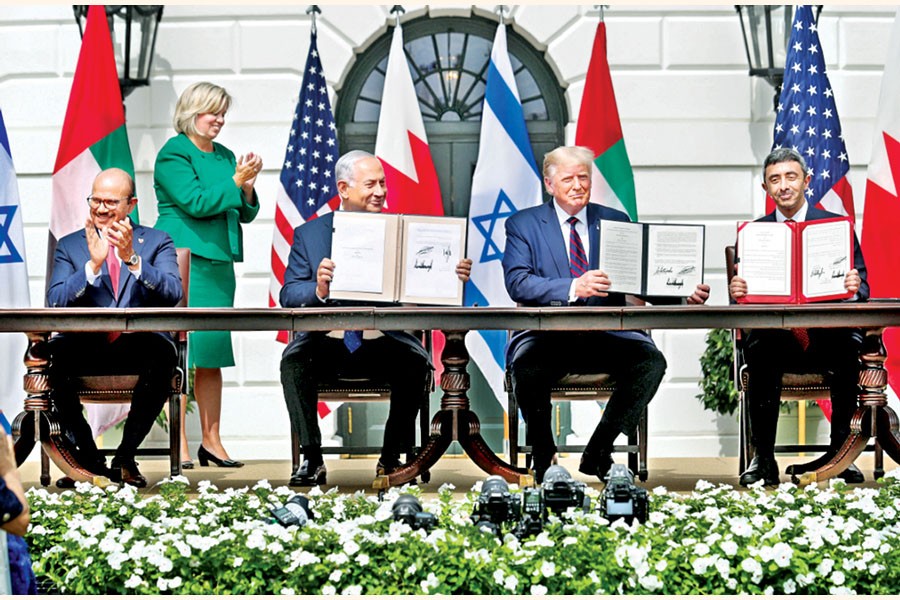 WASHINGTON: U.S. President Donald Trump hosted a signing ceremony Tuesday at the White House for the normalization of relations between Israel and the Arab states of the United Arab Emirates and Bahrain, reports Voice of America.

"These visionary leaders will sign the first two peace deals between Israel and the Arab state in more than a quarter century," Trump said. "In Israel's entire history there have previously been only two such agreements, now we have achieved two in a single month."

"This peace will eventually expand to include other Arab states, and ultimately can end the Arab-Israeli conflict, once and for all," said Netanyahu.

The Israel-UAE deal was initially reached on August 13 between Israel and UAE, with Bahrain announcing last Friday that it will also formally recognize the Jewish state.

"We are witnessing today a new trend that will create a better path for the Middle East," said Abdullah bin Zayed through an interpreter. He added that this new vision "is not a slogan that we raise for political gains" and that "peace is our guiding principle."

"It is now incumbent on us to work urgently and actively to bring about the lasting peace and security our peoples deserve," he said. "A just, comprehensive and enduring two-state solution to the Palestinian-Israeli conflict will be the foundation, the bedrock of such peace."