Unconcerned people out on city streets amid slow virus spread 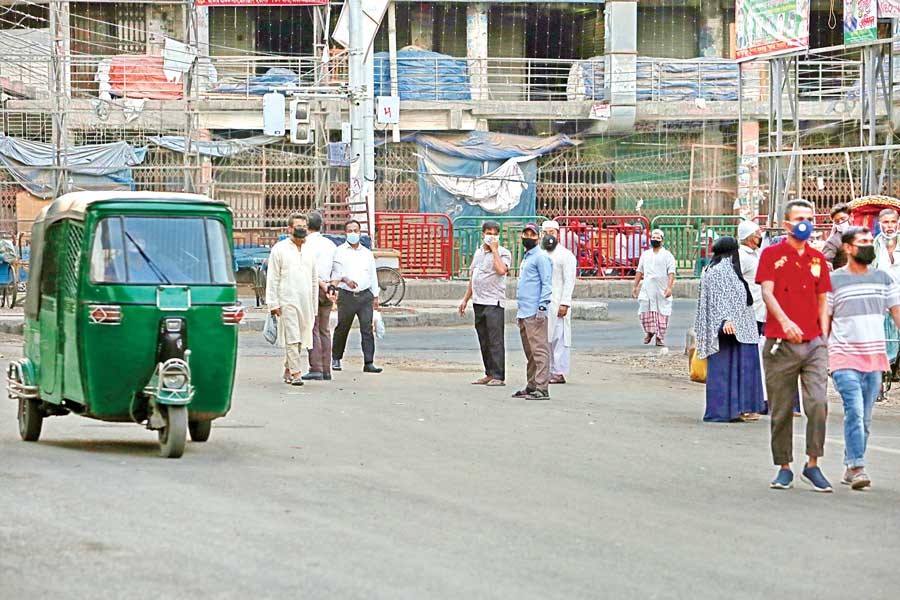 Some people venture out in Gulistan area in the city amid the shutdown over coronavirus outbreak on Tuesday, defeating the purpose of social distancing — FE photo

An increased number of people were seen out on different city streets during the last couple of days defying the social distancing guidelines amid the outbreak of the COVID-19 pandemic.

Many of them seemed relaxed to some extent as they came out from home for different purposes with the coronavirus infections still not that much prevalent in the country.

The government as well as health officials have been advising the people to stay home, which is the most effective measure to contain spread of the virus.

But still many city dwellers were not taking the warning very seriously, members of the police told the FE.

Visiting the city's Panthapth, Karwan Bazar, Moghbazar, Rampura, Hatirjheel and Tejgaon areas, the FE correspondents found that the number of pedestrians and vehicles both increased to a great extent compared to the previous days.

A long and tight queue of at least 30 consumers were found in front of a truck selling subsidized goods of the Trading Corporation of Bangladesh (TCB) near Kawran Bazar in the morning. They appeared indifferent to the much-needed social distancing.

TCB dealer Abu Bakar Siddique said there had been only five to seven customers waiting in line on Sunday, when the people had been more careful about their own safety.

"I think the people are becoming less careful about the social distancing following the news of no fresh COVID-19 infection in the country on Saturday and Sunday and a single case of infection on Monday," he said.

When asked, he said, "I repeatedly request the customers to maintain the distance, but they are nonchalant. Moreover, I cannot force them to do so".

Unlike the consumers, many people were seen moving around without any reason and engaged in chitchat on the sidewalks and at some tea stalls in different areas of the city.

Several policemen at the Moghbazar intersection were seen asking people why they were out on the streets despite the government's instruction to stay at home.

One of them not to be named said some people were coming outside and roaming around for no reason at all.

"Everyone was very much careful about the social distancing during the initial days of the ongoing countrywide shutdown, when we were in action charging baton," he said.

The people were now taking the advantage of the slack patrol of police and other forces.

Some people were seen jogging, hiking or just chitchatting in the city's Hatirjheel area before sunset.

Abdul Wahab, 65, and his wife Yasmin Sultana, 57, both wearing facemasks and gloves, were jogging on one of the sidewalks.

Mr Wahab, a retired banker, said, "Exercising is important to boost immunity, so I and my wife have started jogging again after three days of break."

While asked about the risk of community transmission of COVID-19, the senior citizen said they had taken protective measures and were trying to avoid close contact with other people when outside.

Besides, about 35 to 40 children and teenagers were seen playing cricket in an open space in the Mohanagar Project area of West Rampura.

Sabbir Hossain, a 5th grader, said, "School is closed, house tutor has also been told not to come. How long can one stay home? So, I am playing with my friends."

The government on March 16 announced closure of all educational institutions and coaching centres until April 9 amid the coronavirus pandemic.

The students were also instructed to stay home to avoid any coronavirus infection.

On the other hand, many Muslim devotees were still seen going to prayer halls, a commonplace of mass gathering that raises the possibility of getting infected from a sick and unaware person.

However, the Islamic Foundation Bangladesh (IFB) on Monday said the devotees can continue to say prayers in mosques, but on a limited scale after ensuring proper handwashing with soap and disinfection of floors of the mosques.

Apart from many western countries, a number of Muslim-dominated countries, including Saudi Arabia, the United Arab Emirates (UAE), Kuwait, Bahrain, Qatar, Oman, Tajikistan and Malaysia have either closed down or carefully restricted people's entry to mosques to prevent spread of the virus.

The World Health Organisation (WHO) called upon governments around the world for robust test in communities to identify patients and impose strict social distancing guideline to slow the spread of the virus.

Social distancing or physical distancing is a set of non-pharmaceutical interventions or measures taken to prevent the spread of the contagious disease by maintaining a physical distance between people and reducing the number of times people come in close contact with each other.

Professor Benedetta Allegranzi, Technical lead of Infection Prevention and Control at the WHO headquarters, in a video message, called for maintaining social distancing which means keeping at least one metre (3 feet) away from anyone who is coughing or sneezing.

She also suggested avoiding touching eyes, nose and mouth with hands as the virus can transmit to the hands from many surfaces carrying it.

Respiratory hygiene should be practised which means covering mouth and nose with the bent elbow or tissue while coughing or sneezing, and then disposing of the used tissue immediately, she said.

Other social distancing measures include working from home instead of going to office, closing schools or switching to online classes, contacting loved ones by electronic devices and cancelling or postponing conferences and large meetings.