Vested quarters out there to tarnish Bangladesh's image: Sheikh Hasina 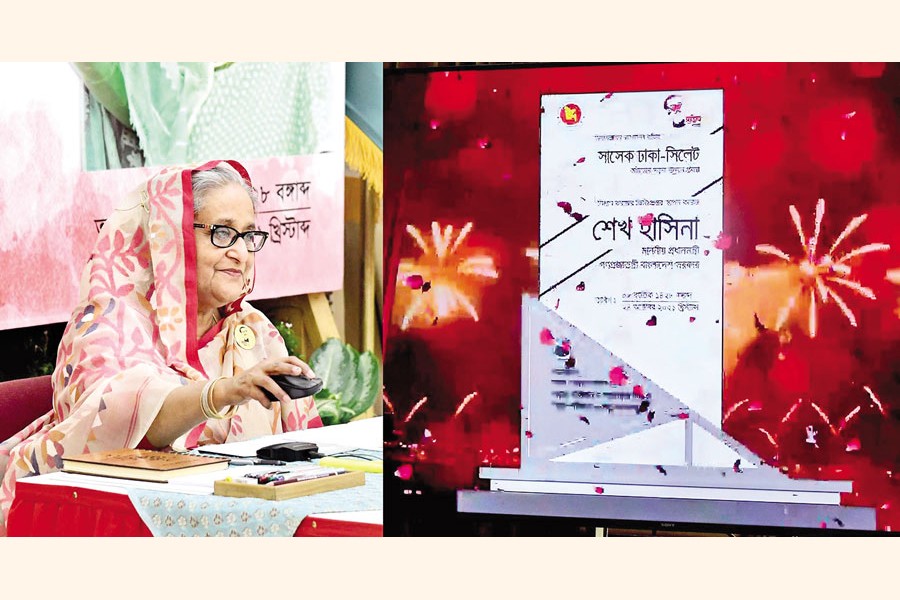 Prime Minister Sheikh Hasina on Sunday said vested quarters are out there to stage various types of incidents in the country to tarnish its image before the world, report agencies.

"Bangladesh will march forward, no one will ever be able to pull Bangladesh back. Some incidents are happening...vested quarters unleashing these deliberately to tarnish the country's image, and you all are aware of that," she said.

The Prime Minister said this while inaugurating Paira Bridge over the Paira River and laying the foundation stone of six-lane (including service lane) Dhaka-Sylhet and Sylhet-Tamabil highways from her official residence Ganobhaban.

She said vested quarters are also engaged in spreading negative propaganda against Bangladesh.

"Whatever development we achieve, one section of people is out there and they're busy demeaning the country," she said.

"They don't want Bangladesh's democratic process to continue, their demands rise whenever there's any unnatural situation in the country," she said.

That is why, she mentioned, this section of people never sees the development of the country. "Instead, they want destruction. This is the reality. The people of the country need to remain aware about it," the PM added.

After winning the 2008 elections, Awami League formed the government in 2009, Hasina said, adding, "As a result of remaining in power for a long time, no one can undermine today's Bangladesh, everyone respects Bangladesh now. Bangladesh has earned respect from the whole world."

Recalling the miserable days of the country after killing Father of the Nation Bangabandhu Sheikh Mujibur Rahman, the Prime Minister said those who were in power directly or indirectly from 1975 to 1996 and 2001 to 2008 wanted to stop the development of the country.

"It was not their desire that Bangladesh will get honour across the globe and the people of this country will move around the world with their heads high. This was very much painful for us," she said.

Talking about the Covid-19 pandemic, Hasina asked all to exercise caution about it.

"We're providing vaccines...no one will be left out as we're taking steps so that everyone can remain safe," she said.

Hasina also said the government is gradually reopening schools and colleges so that there remains no hurdle in academic activities for the students.

The Prime Minister also said the government has adopted Vision 2021, Vision 2041 and Delta Plan 2100 to advance the country.

A video on Paira Bridge and Dhaka-Sylhet and Sylhet-Tamabil highways was screened at the programme.

Meanwhile, as the Payra Bridge opened to traffic after nine years of construction work, the prime minister expressed her regret at being unable to attend the inauguration ceremony in person and cross the bridge by car due to the pandemic.

The 1.5 km long four-lane bridge, costing about Tk 15 billion to build, opens the doors to uninterrupted connectivity between Kuakata and the rest of the country, including Dhaka. The government hopes the bridge will cut the travellers' sufferings and save time and money.

People can now travel to Kuakata from Barishal without having to ride a ferry. A direct road link to Dhaka will remain a dream until the Padma Bridge comes on stream.

Chinese contractor Longjian Road and Bridge Company constructed the bridge, funded by the Bangladesh government and the Kuwait Fund for Arab Economic Development.

The constructors used extradosed cable-stayed, the same technology used to build Shah Amanat Bridge on the Karnaphuli River in Chattogram, for the Payra Bridge.

The height of the new bridge is 18.3 metres from the river water level and it will not hamper river traffic, project director Abdul Halim said.

To keep the water flow normal, only one large pier has been set up in the middle of the river. Cables have been used to keep the bridge up from the main pier and two at both ends.

It has a health monitor that will keep it safe from earthquakes, lightning strikes and other natural calamities. The system will sound an alarm automatically if a vehicle with loads beyond the bridge's limit gets on it.

Initiated nearly a decade ago, the Payra Bridge project's deadline was extended from five to nine years. The cost also saw a threefold increase.

The bridge is expected to boost trade and commerce in the southern part of the country as well as accelerate the economic activities of Payra port.