'Whole of humanity' at risk: UN

It launches $2.0b appeal for world’s poorest 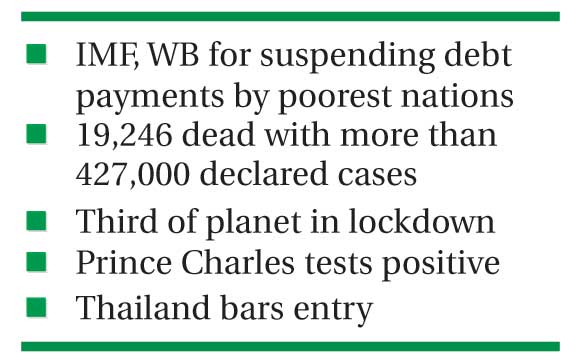 "This COVID-19 Global Humanitarian Response Plan aims to enable us to fight the virus in the world's poorest countries, and address the needs of the most vulnerable people, especially women and children, older people, and those with disabilities or chronic illness," said Guterres.

"We cannot afford to lose the gains we have made through investments in humanitarian action and in the Sustainable Development Goals," he added.

The amount of money sought by the plan is small compared to the $2.0 trillion that the US Congress is poised to approve as a rescue effort for devastated American consumers, companies and hospitals as the US economy grinds to a sudden halt.

The UN plan is designed to last from April to December -- suggesting the UN does not see the crisis ending any time soon.

The exact total of $2.012 billion is supposed to come from appeals that various UN agencies have already made, such as the World Health Organisation and the World Food Program (WFP).

The International Monetary Fund (IMF) and World Bank (WB) on Wednesday called for governments to put a hold on debt payments from the world's poorest nations so they can battle the coronavirus pandemic.

"The World Bank Group and the IMF believe it is imperative at this moment to provide a global sense of relief for developing countries as well as a strong signal to financial markets," the Washington-based development lenders said in a joint statement.

The IMF and World Bank called on the Group of 20 nations to support the initiative for "all official bilateral creditors to suspend debt payments from IDA countries that request forbearance."

Spain joined Italy on Wednesday in seeing its death toll from the coronavirus epidemic surpass that of China, as more than a billion Indians joined a lockdown that has confined a third of humanity.

As of 1100 GMT on Wednesday, the number of deaths around the world from the new coronavirus strain stood at 19,246, with more that 427,000 declared cases registered in 181 countries and territories.

China has begun to relax its own draconian restrictions on free movement after reporting no new cases, and Spain announced a 432-million-euro ($467 million) deal to buy medical supplies from Beijing.

Prince Charles, the eldest son and heir to Queen Elizabeth II, is showing mild symptoms of the new coronavirus and is self-isolating in Scotland, his office said on Wednesday, as Prime Minister Boris Johnson praised the country's response to tackling the outbreak.

The 71-year-old Prince of Wales is staying on his mother's sprawling Balmoral estate in Scotland, but "otherwise remains in good health".

Thailand barred entry into the kingdom late on Wednesday, enacting sweeping emergency powers in a bid to stem the local spread of the coronavirus outbreak.

The measures, which stopped short of a full lockdown after days of vacillation by the government, are a hammer blow to the country's vital tourism sector.

Tens of thousands of travellers remain in the kingdom, facing uncertainty with airlines in chaos and restrictions on return to their countries.