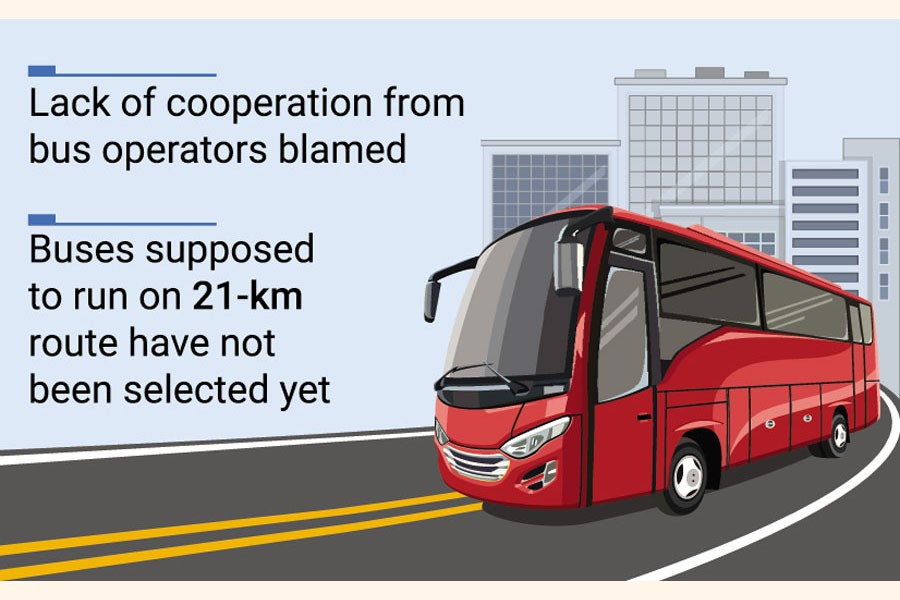 The launch of cluster bus service in the city under a joint-venture company may be delayed further due to 'a lack of cooperation' from bus operators.

The special committee, formed to work on bus route rationalisation (BRR) on the city's 450 routes, announced its plan to launch cluster bus service from Kanchpur Bridge to Ghatarchar via Motijheel on December 1 this year.

But sources said the buses which were supposed to be running on the 21-kilometre route have not been selected yet. Even the joint-venture agreement among bus operators was not signed till Tuesday, they added.

"After finalising 120 buses running on the existing route, those were supposed to be overhauled and coloured for operation on December 1," said a source close to organising the piloting.

He said Dhaka Bus Owners' Association sent a list of 104 buses which was totally different from the list of 120 buses placed by the association earlier and accepted in the 18th meeting of the committee.

Not only this, the buses listed by DBOA do not have route permits and these were bought before 2019 which went against the decision taken in the committee's last meeting held in October.

Dhaka South City Corporation mayor Sheikh Fazle Noor Taposh who led the committee announced the December 01 deadline after the 18th meeting which was attended by all its members including representatives from bus owners and workers.

He also said the buses were selected from the categories of purchase from January 1, 2019 and onward. "No old bus than 2019 will be allowed to run on this route and those must have route permits," he added.

The government initiated the bus route franchise system as per the recommendation of the Strategic Transport Plan-2015 during the tenure of Mayor Annisul Haque. After his death, the government formed a 10-member special committee, led by the Dhaka south city corporation mayor, on September 09 in 2018.

The committee proposed piloting the service from the green cluster after designing the city's 450 routes merging them into six clusters to bring discipline and stop unhealthy competition among bus operators on the streets.

If the committee misses the December 01 deadline, it will have to reset the deadline for the fourth time.

Though many BRF concepts were relaxed by the committee in the pilot project, the bus operators failed to reach a consensus on the share of profits, sources said, adding that even they did not form the listed company.

Later, the decision was taken to sign a joint-venture agreement among the owners of buses which are on the list and operating from Ghatarchar to Kanchpur Bridge.