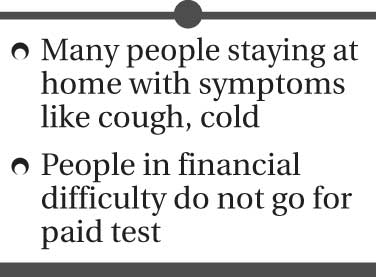 The number of sample tests for novel coronavirus infection has fallen in the country but the laboratories conducting the tests have grown paradoxically, betraying a fall in the rate of confirmed cases, reports bdnews24.com.

One of the reasons for fewer tests is the fee imposed by the government for sample tests. The second reason is the scrapping of second and third tests after recovery from the disease, according to the Directorate General of Health Services.

Experts say Bangladesh is still grappling with the pandemic and the testing should not be allowed to drop under the current circumstances.

The data of sample tests done by DGHS show an upward trend from January to June when the number of patients and sample test laboratories increased.

The number of confirmed cases drops in line with dropping virus tests, which is why the real situation is not reflected, said Prof Be-Nazir Ahmed, former director of communicable disease control at DGHS. That hampers the management of the COVID-19 crisis.

"We can't isolate the infected patients who are not identified. Then there'll be new patients and patient clusters will increase as well."

"More people will move around in times of the Eid-ul-Azha and clusters of patients will spread the contagion," Ahmed said.

Prof Md Nazrul Islam, former vice-chancellor of Bangabandhu Sheikh Mujib Medical University, told the news agency that from the very beginning, they had been suggesting 20,000 countrywide tests a day to get the first picture of the epidemic's real scale and speed.

He admitted that the testing process has some flaws but added people are coming forward to be tested. More tests would be done if the health authorities collected samples from the sick or those showing the symptoms.

"Many people are staying at home with symptoms like cough and cold. Therefore, we'll not get the real picture," Prof Islam cautioned.

On July 02, the government imposed a fee on sample tests and the number of tests dropped by about 4,000 the following day.

"The connection between paying money and getting tested is evident. I wonder how the idea of charging Tk 200 for a test evolved. A person in financial difficulty will never go for a paid test," he added.

"This shows that there's a daily surge in the infection, even if it's low. We can never say that it has declined. We need more information when there's a spike in cases, and therefore, we must conduct more tests."