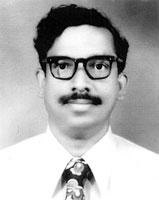 On this day, food will be distributed among the distressed people after Quran Khawani following the Asar prayer at his own residence.

During the liberation war of Bangladesh he launched the Eastern News Agency (ENA).