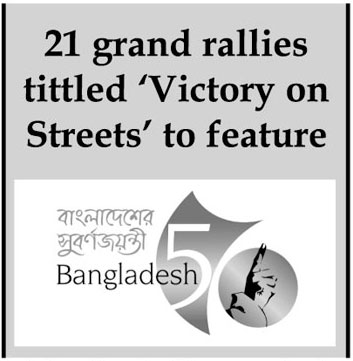 The government has decided to celebrate the Golden Jubilee of the country's Independence holding 21 grand rallies with the title 'Victory on Streets" across the country from tomorrow (Friday), reports BSS.

"Of the total grand rallies seven will be held at regional level and 14 will be held at sub-regional level in the areas which were freed from Pakistani occupation forces before December 16, 1971," said a press release quoted Liberation War Affairs Minister AKM Mozammel Haque as he told a press briefing at the ministry's conference room in the Secretariat in the city Wednesday.

The celebration through the grand rallies will begin tomorrow (Friday) by holding the first sub-regional level grand rally in Dinajpur, he said.

Mozammel, also chairman of the cabinet committee constituted to celebrate the Golden Jubilee of Independence, said, "The cabinet committee has finalised 50 programmes at national level to celebrate the Golden Jubilee of the country's Independence in a befitting manner. The grand rallies with the title 'Victory on Streets (Pathe Pathe Bijoy)' is one of them".

Noting that though Bangladesh had achieved final victory on December 16, 1971, many regions of the country were freed from Pakistani enemies before the date, he said, "By celebrating these victories, we are trying to uphold the significance of the enemy-free areas (before December 16) to the country's people".

The rallies will be held at the centre points of cities where people of all walk of life, including Liberation War veteran freedom fighters, public representatives, political leaders, social dignitaries, literary personality, teachers, journalists, artists and students, could join the function easily.