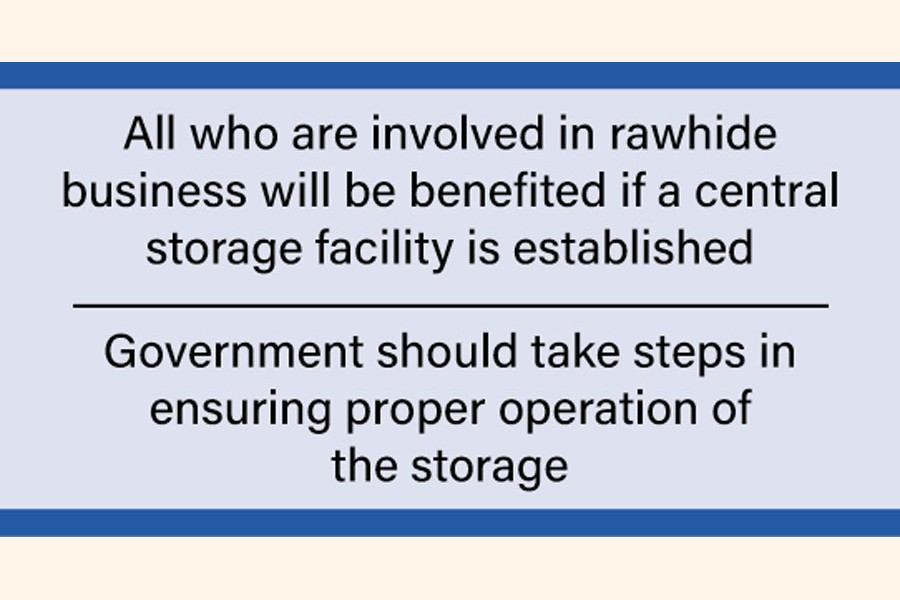 A move is underway to establish a central storage facility in Savar industrial hub to help ensure fair prices and quality of rawhides and skins as well as for proper management of the items, officials said.

The Bangladesh Small and Cottage Industries Corporation (BSCIC) will be the implementing agency in setting up the proposed storage on the outskirts of Dhaka.

The decision came in a meeting of the taskforce concerned in line with the demand of stakeholders, including the Leather Goods and Footwear Manufacturers and Exporters Association of Bangladesh (LFMEAB).

In the meeting, LFMEAB President Md Saiful Islam said, "All, who are involved in rawhide business, will be benefited, if a central storage facility is established in Savar."

The government is considering to help the traders concerned by setting up the storage for preserving rawhides.

The move has been taken following requests of the stakeholders concerned, a high official of the Ministry of Industries said.

He also explained that the government would extend all sorts of support for establishing such storage in Savar, where the country's Tannery Industrial Estate is also located.

There are 205 plots in the tannery estate. Of these, some 155 have already been allocated, and 132 are now operating.

"We are working on the storage issue. The process is now at its initial stage," a senior official said.

Thousands pieces of rawhides of sacrificial animals remained unsold during the Eid-ul-Azha in previous years. Many people buried and threw away their rawhides after failing to get expected prices, while others sold those at throwaway prices.

A drastic fall in rawhide prices forced small, medium and seasonal traders in different districts to incur huge loss during the Eid festivals.

If a central storage for rawhides and skins is set up in the country, such situation would not take place in future, he added.

Industry insiders said if the central warehouse is constructed with the help of the government to preserve rawhides, it would be better for the country's leather sector.

They opined that good management would have to be ensured for proper operation of the storage.

Under the Bangladesh Hide and Skin Merchants Association (BHSMA), there are around 300 warehouses across Dhaka city apart from more than 1,600 makeshift warehouses.

Nearly 0.12 million people are involved with around 5,000 warehouses across the country.

Tanners and leather traders have long been demanding to establish a cold storage facility in the Tannery Industrial Estate or in nearby strategic areas.