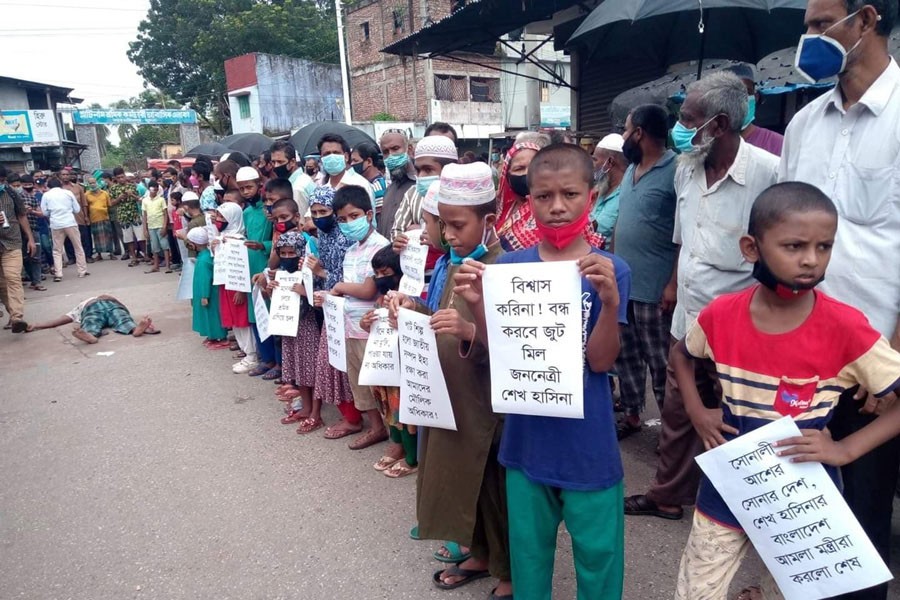 KHULNA, June 29 (bdnews24.com): Workers of nine state-owned jute mills in Khulna have launched protests against the government's decision to send them into early retirement as part of the plans to revitalise the floundering sector.

Workers and staffers along with their children staged sit-ins at the entrances of their respective workplaces in Khulna and Jashore for two hours from 9am on Monday.

The protests will resume at the same time tomorrow (Tuesday) and Wednesday, said Khalilur Rahman, a worker of Platinum Jute Mills in Khulna. He warned that the workers will go on a hunger strike if the government does not change its decision.

It came a day after the government announced plans to send about 25,000 workers of loss-making jute mills into early retirement under a programme known as golden handshake.

The move aims to modernise and reinvigorate the sector through private-public partnerships, Textiles and Jute Minister Golam Dastagir Gazi said on Sunday.

"In line with the prime minister's directive, the authorities will pay the workers their dues according to the wage scale," Khulna Mayor Alhaj Talukdar Abdul Khalek told reporters on Monday.

Among the 26 jute mills under the Bangladesh Jute Mills Corporation, Monowar Jute Mill has already been shut down. The other mills employ 24,866 permanent workers along with 26,000 temporary workers.