'No buildings without fire safety measures'

The government will not allow any building to use without fire safety measures and clearance certificate from the authority concerned, said State Minister for Disaster Management and Relief Dr Enamur Rahman on Friday evening.

"The government will not allow any building for use without fire safety protection. Fire safety is a must for new buildings. The city corporations or RAJUk will give approval for using the buildings having fire safety certificate," he said.

The junior minister said that out of 10 green factories in the world, eight are now in Bangladesh, citing the country is ahead compared to other countries on the compliance issue of fire safety and resulted in increased production at the local factories. 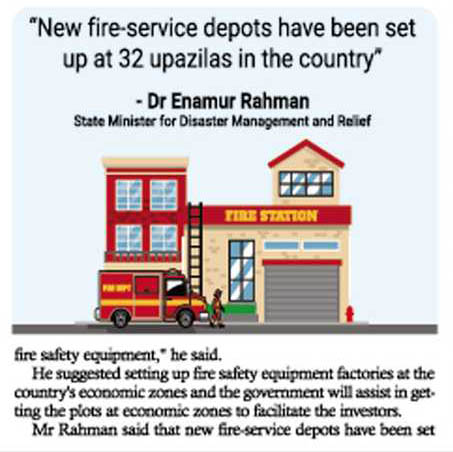 He said that most of the fire safety equipment are being imported.

"We don't want to remain as an import-oriented country of fire safety equipment," he said.

He suggested setting up fire safety equipment factories at the country's economic zones and the government will assist in getting the plots at economic zones to facilitate the investors.

Mr Rahman said that new fire-service depots have been set up at 32 upazilas in the country.

Vice-President of the Federation of Bangladesh Chambers of Commerce and Industry (FBCCI) Md Amin Helaly said that the country's apex trade body has taken initiatives for proving training on indoor and outdoor fire safety protection through the formation of FBCCI Fire Safety Council.

He suggested creating and providing fire service package (safety) for houses and small industries after collecting information and data.

Nine companies were given awards by ESSAB by the junior minister for maintaining fire safety measures properly.

He also handed over 13 crests to the members of the families of fire-fighters who died while performing duties during a devastating fire at BM Container Depot at Sitakundu in Chattogram.