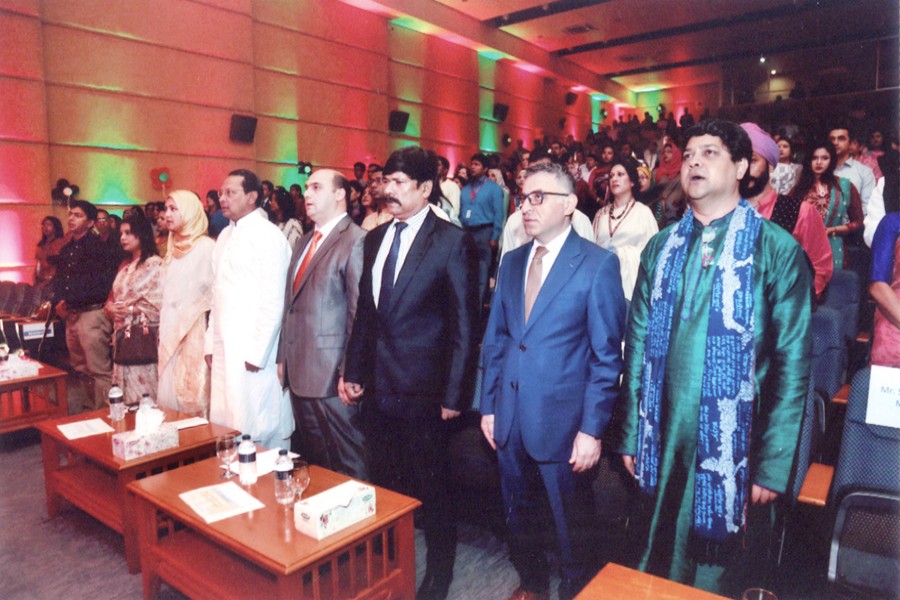 Information Minister Hasanul Haq Inu is seen with the contestants and others in the 7th Inter-school Bangla Olympiad held on the main campus of the International Turkish Hope School (ITHS) recently.

A large number of contestants from schools around Dhaka participated in the 7th Inter-school Bangla Olympiad held on the main campus of the International Turkish Hope School (ITHS) on February 17 last, says a press release.

A total of 1,500 participants from 62 schools having 88 branches participated in six categories to show their talents. The six fields were music, poem recitation, essay writing, drawing, group dance and extempore speech.

The presentation and gala ceremony was held on Thursday with the winning students along with their parents, school principals and coordinators present on the occasion.

Information Minister Hasanul Haq Inu was the chief guest and Prof Dr Md Harun-Ur-Rashid Askari, Vice-Chancellor of the Islami University, was the guest of honour.

Speaking on the occasion, Hasanul Haq Inu laid emphasis on remembering the history of the language movement and the sacrifices of the martyrs.

Harun-Ur-Rashid Askari appreciated the arrangement of the Bangla Olympiad by the ITHS.

They both urged all the students to give first priority to Bangla language, the mother tongue.

The ITHS has been organising the Bangla Olympiad for the last eight years in February, the month of International Mother Language Day. Students from prominent English medium schools and the schools following the English versions of the national curriculum participated in the annual inter-school competition. The programme has been envisioned for the purpose of cultivating students' interest in Bangla and stimulating their intellect through the use of that great language.