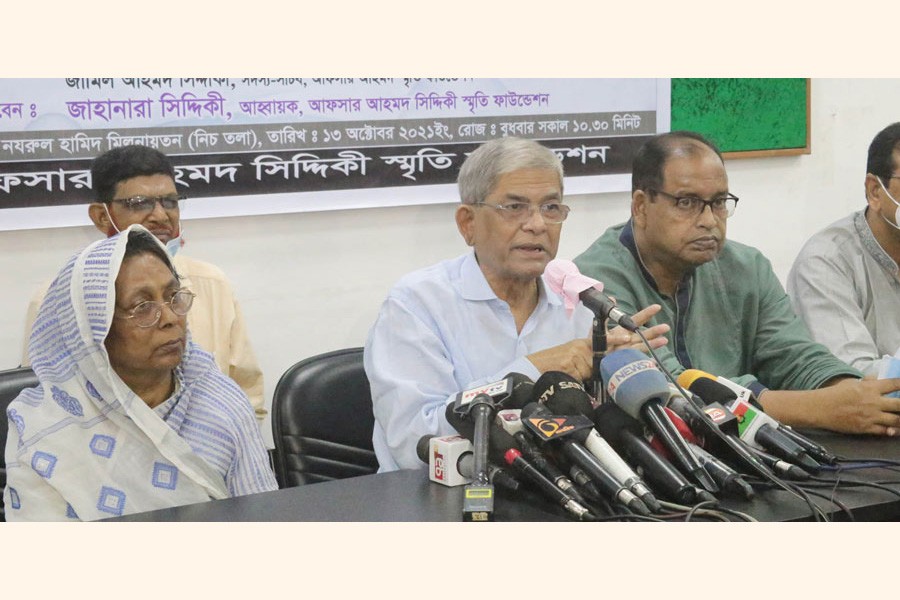 BNP on Wednesday alleged that the 'ruling party men' are involved in swindling money from online shoppers in the name of e-commerce, reports UNB.

"Huge money has been swindled from people in the name of e-commerce. Who're the looters in e-commerce? Who're pampering the looters and who're giving them protection? The ruling party men are involved in it," BNP secretary general Mirza Fakhrul Ialam Alamgir said.

Stating that he 'saw the photograph of a CEO of an e-commerce company with the Prime Minister', Fakhrul said some people are cutting deep into the pockets of people and plunder money with the 'patronage of the government and the ruling party'.

He said the 'ruling men' also shattered the banking system and depleted the banks through widespread plundering.

"Every bank is now at stake. If you talk to bankers you'll have an idea about the real scenario. I've a friend who happens to be a very big economist. He knows this system very well. He says those who keep money in banks or are involved in the banking system are the worst affected ones as every bank is in a state of bankruptcy," the BNP leader said.

He also alleged that general people except the ruling party leaders are now denied loans by banks as all bank directors belong to Awami League. "For a loan of Tk 100 million, one has to pay a bribe of Tk 50 million while the rest Tk 50 million is hardly needed to be returned."

Fakhrul said it is pity that some people are plundering public money and making their fortunes in this country where many people live alongside roads and footpaths as they have no shelter.

"Today we see many people building new houses of their own and buying cars though they had lived a very ordinary life 10 years back and this has been possible because of their involvement with the ruling party. This is the reality everywhere, even at the upazila level," he observed.

Criticizing Awami League General Secretary Obaidul Quader for his comment that BNP's plan to create another mass uprising like the 90s is a daydream, Fakhrul said the ruling party has in fact got unnerved with the possibility of losing power.

He called upon BNP leaders and activists to get united to ensure fall of the government through a movement. "We've to unite and give a push and then the regime will fall apart. We've no other alternative to it."