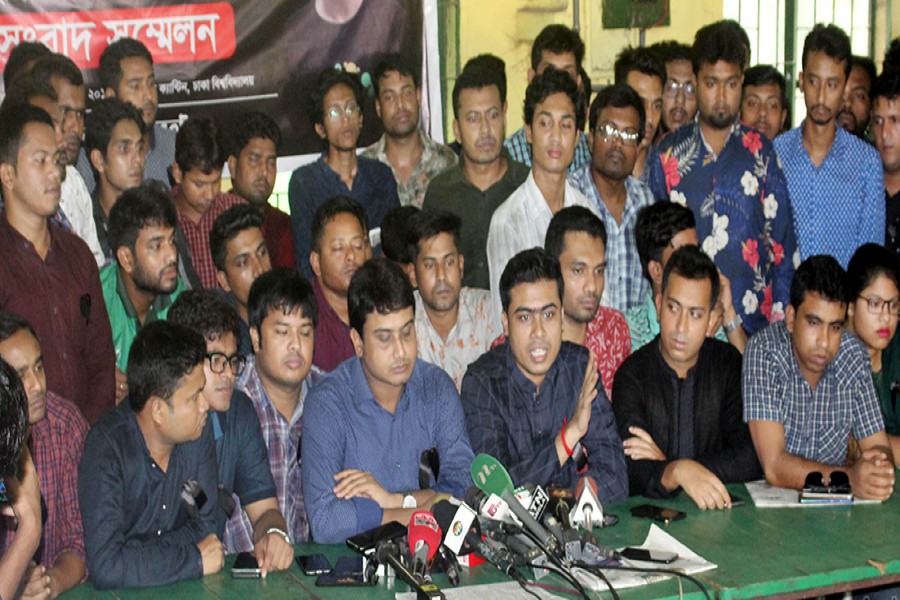 Bangladesh Chhatra League has called for the capital punishment for those involved in the murder of BUET student Abrar Fahad through a speedy trial, reports bdnews24.com.

BCL acting President Al-Nahyan Khan Joy and acting General Secretary Lekhak Bhattacharya made the call at a press briefing on the Dhaka University campus on Wednesday.

"We urge the government to complete the trial process as soon as possible. The Abrar murder case should be brought under the Speedy Trial Act and the highest punishment for everyone involved in the homicide should be ensured," said Joy.

The body of Abrar, a second-year student of electrical and electronic engineering of BUET, was found on the staircase of his hall on Monday. Classmates of Abrar claimed that BCL men beat him to death suspecting his links with Islami Chhatra Shibir, the student wing of the Jamaat-e-Islami.

Chhatra League has found that its leaders and activists who allegedly beat Abrar to death were "drunk" when they committed the crime. The student wing of the ruling party has already expelled 11 of its members in this connection.

"The organisation has formally condemned the incident while demanding the trial of the perpetrators irrespective of their identity. It formed a two-strong probe committee and ordered them to submit a report by 24 hours," said Joy, pointing to the swift actions taken by the BCL over the incident.

"Eleven members were permanently expelled after the probe committee submitted its report ahead of the deadline," he said.

None of the persons affiliated with BCL will be spared and will face trial if they engage in any criminal act in a personal capacity, according to Joy.

"Bangladesh Chhatra League never patronises any violent extremist activity. A number of extremely enthusiastic people have used the name and designation of the organisation while engaging in crimes, which the BCL had never acknowledged in the past nor will it do in the future. Chhatra League has proved that again in the context of Abrar's murder," said the acting president of BCL.

Law enforcement agency has already arrested 13 among the 19 accused in the gruesome murder case, said Joy.

"We urge the law enforcement agencies to arrest the other suspects who are at large and put them on trial. They should find if there are more perpetrators other than the 19 named in the case, and bring them to book."