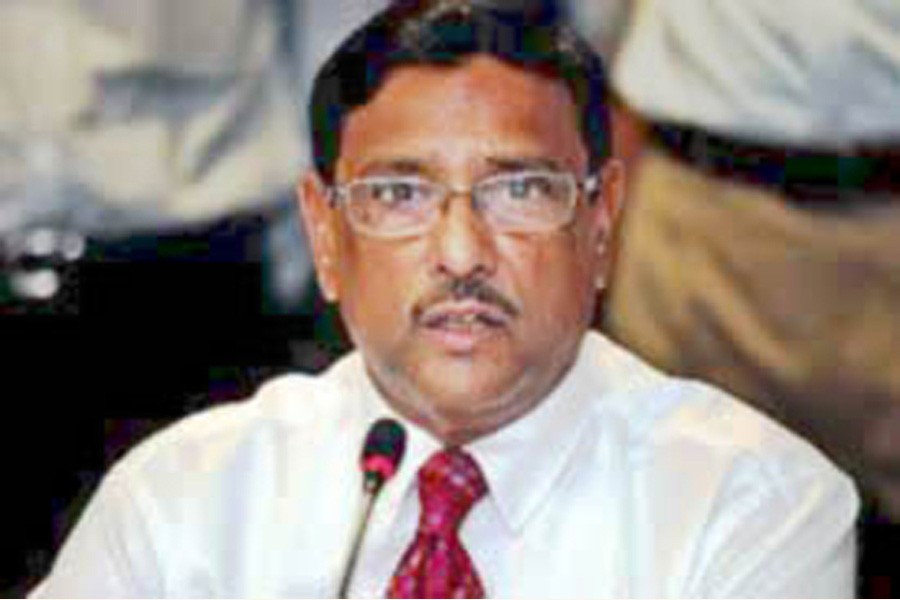 Awami League (AL) General Secretary Obaidul Quader said on Thursday BNP is out to hatch conspiracies at home and abroad to oust the government, reports BSS.

He also said conspiracy is the political philosophy of the party.

"Media reports revealed that BNP and communal forces held secret meetings with a foreign agency to make an evil design to oust the government," he said.

"They hatch conspiracies abroad against the government and on the other hand, they talk about joining polls," he added.

He said such behaviour reveals that BNP maintains 'double standard' and does politics of conspiracy. They talk about democracy and polls but resort to duplicity and conspiracy, he added.

The minister was addressing a review meeting on progress of cross-border road network development project through videoconferencing from his official residence on the parliament premises in the city.

Quader said the government gets all information wherever BNP holds secret meeting either in Jeddah or in Abu Dhabi.

"We want to say that there will be no benefit by hatching conspiracies through holding secret meetings," he said.

The AL general secretary said everyone should do politics for wellbeing of the people. "If you (BNP) want to go to power, try to win the hearts of the people instead of seeking help of foreign force or agency," he added.

Turning to coronavirus situation, Quader said constant aware is the best policy to stay safe. Many people are seen showing negligence to maintaining health guidelines but it can lead everyone to further risk, he added.

The minister said it is yet to be sure when effective and universally accepted vaccine of coronavirus will come. Meanwhile, the experts are predicting that the coronavirus situation may further worsen in the upcoming winter.

Quader said the government under the leadership of Prime Minister Sheikh Hasina is taking preparations afresh for facing the second wave of Covid-19.

He urged everyone to maintain health guidelines properly and wear facemask mandatory to remain safe.

About the construction of 'Kalna Bridge' over Madhumati River between Kashiani upazila under Gopalganj district and Lohagara upazila under Narail district, the minister said around 35 per cent work of the bridge construction has already been completed.

He said the six-lane 690-meter bridge is very important as it will connect the highway towards Padma bridge while the people of the southwestern region including Jashore, Narail, Magura, Jhenidah, Chuadanga, Meherpur, Satkhira and part of Khulna districts will be benefitted directly.

Officials of Road Transport and Highways Division and Roads and Highways Department and project director joined the meeting through virtual platforms.