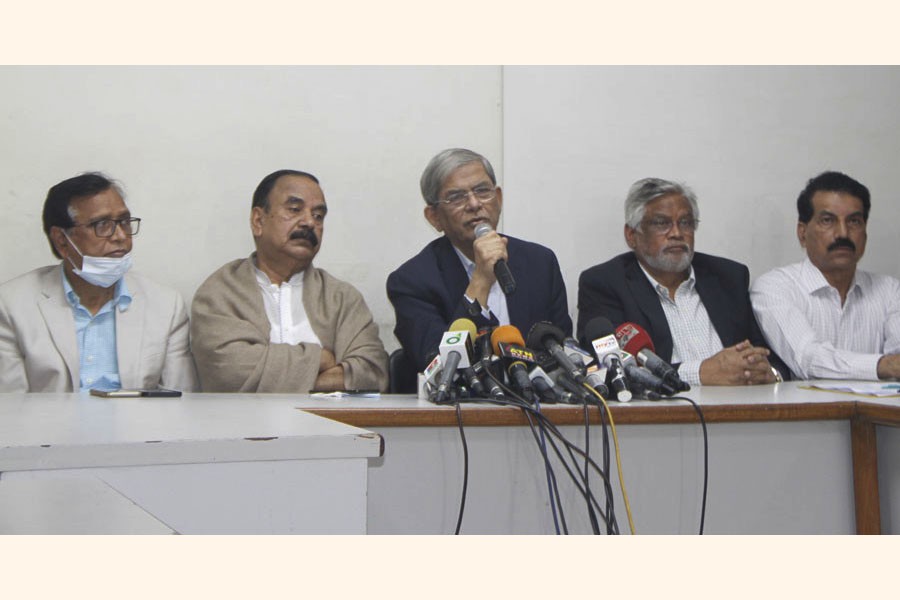 BNP and its associate bodies have taken up an eight-day countrywide programme to force the government for allowing its chairperson Khaleda Zia to go abroad for advanced medical treatment, reports UNB.

BNP Secretary General Mirza Fakhrul Islam Alamgir announced the programme after a joint meeting of the party and its associate bodies at the BNP's Nayapaltan central office on Wednesday.

As part of the programmes, he said, Jubo Dal will stage demonstrations across the country today (Thursday), while Swechchasebak Dal, Krishak Dal and Chhatra Dal will observe a similar programme all over the country on November 28, December 3 and December 4 respectively.

In Dhaka, the programmes will be held in front of the Jatiya Press Club, the BNP leader said.

Besides, Fakhrul said, BNP will arrange doa mahfil in all mosques across the country after Juma' prayers on November 26 praying for Khaleda's release and early recovery. The other religious community members will also arrange prayer sessions in their worship places the same day.

"We're going to observe the programmes from tomorrow (Thursday) demanding Madam's (Khaleda's) release and her treatment abroad. Observance of these programmes will depend on Khaleda Zia's health condition. We may change the programmes, if necessary," he said.

He condemned the attacks on their party's rallies in different parts of the country, including Khulna, Narsingdi, Natore, Satkhira and Barguna on Monday, demanding Khaleda's release for advanced treatment outside the country.

Meanwhile, BNP's all district units submitted memorandums to the Deputy Commissioner (DC) offices across the country on Wednesday to press for their same demand.

On Monday, the party arranged countrywide rallies and observed a seven-hour mass-hunger strike all over the country on Saturday to mount pressure on the government to allow ailing Khaleda to go abroad.

Khaleda, a 76-year-old former prime minister, was readmitted to Evercare Hospital on November 13, six days after she had returned home from the hospital.