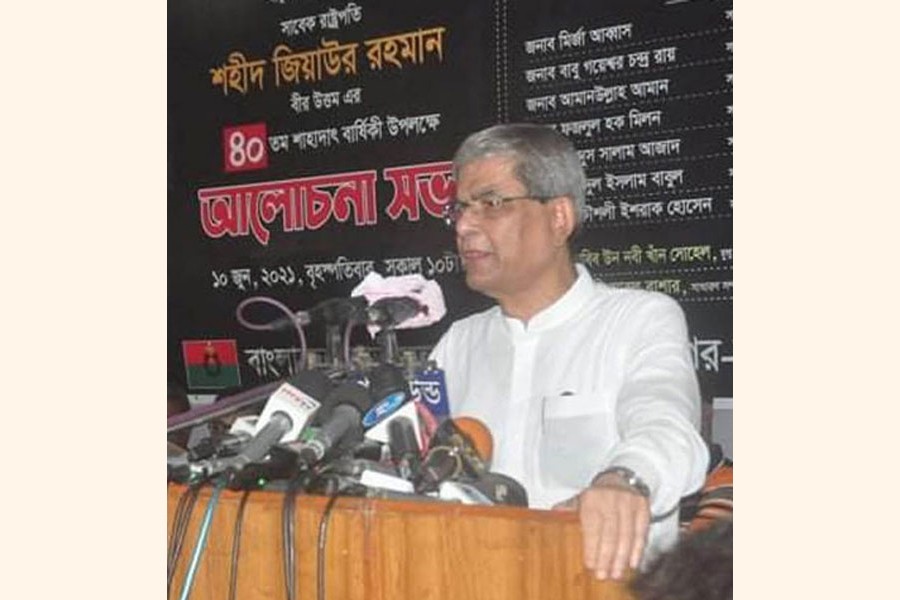 "Get ready for a movement as time is running out fast. We must stand on our own feet together with people. Let's forge a national unity," he said.

Speaking at a discussion, the BNP leader said, "Quit power and save Bangladesh. It's our only demand. We would like to tell you (govt) to step down immediately and arrange a fair and credible election under a neutral government and a neutral Election Commission. Otherwise, people know how to realise their rights."

Fakhrul alleged that the ruling party leaders and activists are committing corruption and carrying out plundering at a time when the country grapples with coronavirus.

"One of their (AL) MPs said in Parliament a few days ago that small thieves are now ashamed of seeing big thugs stealing. The big thieves are their ministers and big leaders. Corona is taking its heavy toll on human life. It's now a question of life and death, but they're indulging in theft over Covid tests, procurement of masks and PPE and ICU beds. They're also stealing the money of doctors, nurses and hospitals," he said.

Stating that a makeshift hospital in the capital has vanished, Fakhrul said they will now set new hospitals and steal money and take commission again, and siphon off the money to Canada, Malaysia, and the UK. "Money laundering practice has taken a terrible turn in the country. According to our economists, TK 6 lakh crore has been siphoned off abroad over the last few years. This's exactly the Awami League."

He also said even a small leader of Awami League has suddenly turned into a rich man with ill-gotten money. "The existence of Bangladesh will be at stake if they stay in power for a longer time."

The BNP leader alleged that the government has long been suppressing people's voice abusing different laws and acts, including the Digital Security Act.

"Our journalist brothers now can't write anything strictly. I don't blame them. I rather express sympathy for them. If they write anything they'll be sent to jail, implicated in cases under the Digital Security Act," he observed.