Take to streets to press for her treatment abroad: Fakhrul 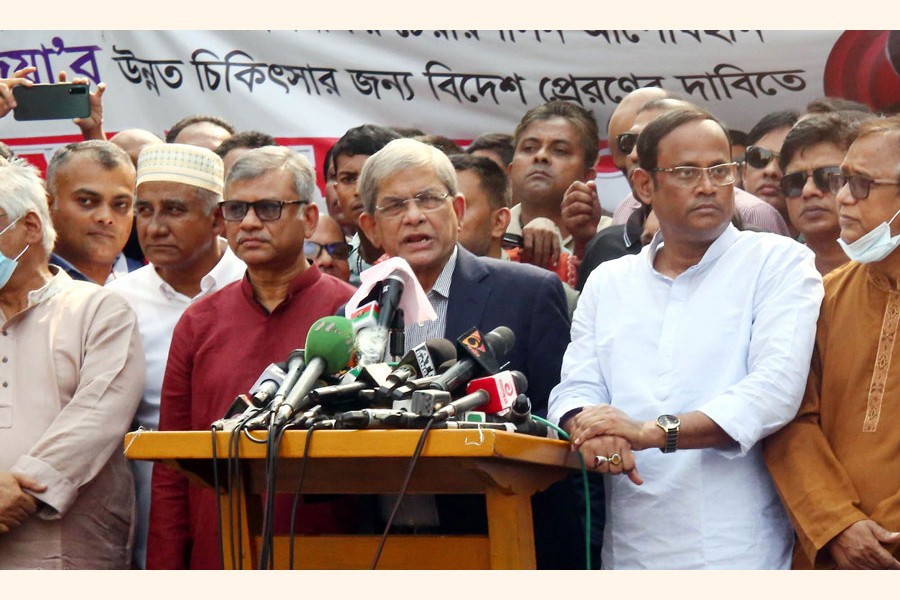 BNP Secretary General Mirza Fakhrul Islam Alamgir on Thursday suspected that their party chairperson Khaleda Zia might have been subjected to slow-poisoning during her stay in Old Dhaka Central Jail, reports UNB.

"As part of a plot hatched during the 1/11 changeover, she (Khaleda) was sent to jail by convicting her in false cases. She was kept for about two years in an abandoned damp building of the Old Dhaka's Central Jail where rats used to run around," he said.

Speaking at a rally, he said the BNP chief was later taken to Bangabandhu Sheikh Mujib Medical University (BSMMU) from the jail, but she was not given proper treatment there.

"Many people have this question now: was there any arrangement for slow-poisoning Khaleda Zia on that day? We want to know this clearly. Nothing is impossible for them (govt)."

He said it is possible to do anything bad for the government when it could assume power by indulging in 'vote robbery' the night before the voting day, filing false cases against 3.5 million people, gunning down and maiming the pro-democracy leaders and activists, and making disappear around 500 opposition leaders and activists.

Fakhrul called upon all, including their party leaders and activists, to take to the streets to force the government to allow Khaleda to go abroad.

"Khaleda Zia is now fighting for her life. Shall we stay indoors? We must put in our all-out efforts to save her life," he said.

The BNP leader warned that the consequences will be dire if the government does not allow Khaleda to go abroad. "Let's be united in a stronger way and intensify our movement."

Fakhrul said doctors at Evercare Hospital are saying they have no more capacity to treat the BNP chief as her condition turned so much critical.

"They've clearly said she (Khaleda) needs to be sent abroad immediately for her treatment. But Sheikh Hasina (PM) does not want to pay heed to it out of her vengeance. She's conspiring to eliminate Khaleda Zia's life, not only to remove her from politics," he said.

The BNP leader said they know there has been international pressure on the government to send Khaleda abroad, but the Prime Minister is not willing to do so.

Khaleda, a 76-year-old former prime minister, was readmitted to Evercare Hospital on November 13, six days after she had returned home from the hospital.

The BNP chief's physicians said she has been suffering from rheumatoid arthritis, diabetes, critical cardiac, kidney ophthalmological and dental complications. The hemoglobin level in her blood has also dropped.