No problem with movement, but don't go for violence, PM tells BNP 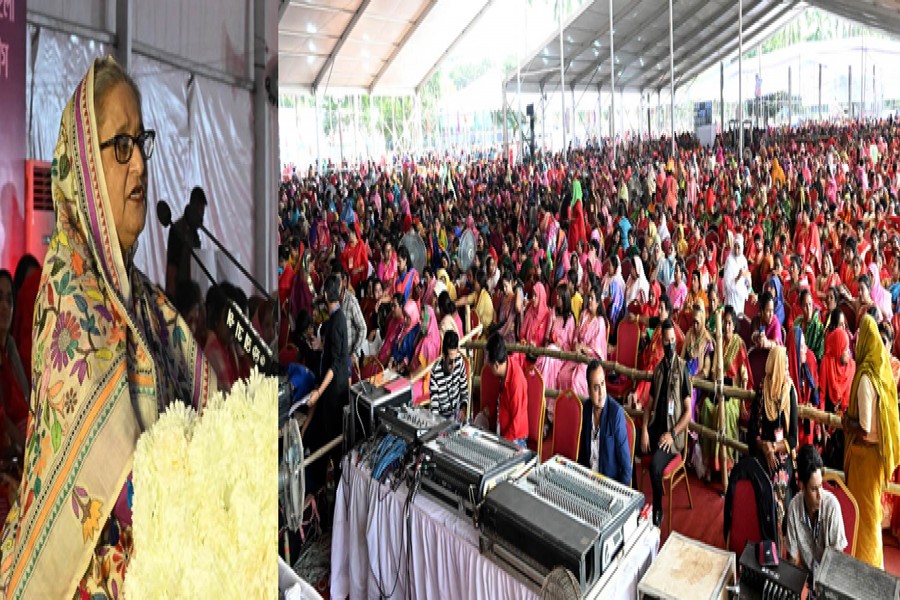 Prime Minister Sheikh Hasina on Saturday said BNP is free to hold meetings and processions, but her government will take stern action if the opposition resorts to arson attacks and killings in the name of anti-government movement, reports UNB.

"We have no objection to your movement. But we will not spare a single person if there is any incident of arson attacks, burning people alive and hurling grenades on the innocents," she said in issuing a warning to BNP.

The prime minister said this while addressing the sixth triennial national council of Mahila Awami League, an associate body of the ruling Awami League, at the historic Suhrawardy Udyan.

Hasina, who is the president of AL, attended the opening session as the chief guest.

The prime minister's warning came as BNP has launched a campaign of divisional rallies to demand that the AL government steps down to pave the way for forming a neutral caretaker administration for holding the next general election. The opposition party is also highlighting the sky-rocketing prices of the essential commodities.

Hasina lambasted BNP-Jamaat regime for unleashing a rein of torture and repression across the country after it came to power in 2001.

"They came down on the womenfolk. There was not a single place in Bangladesh where their torture and oppression was not done," she told the conference.

She reminded the audience of the arson attacks by BNP hooligans during the party's anti-government agitation before the 2014 parliamentary polls.

"Can any human being carry such arson attacks killing and burning innocent people?" she wondered.

She said her party believes in tolerance, but that does not mean "we had forgotten the BNP's heinous attacks on Awami League leaders and activists after 2001 election (won by BNP-Jamaat).

The prime minister said that's why the people of Bangladesh are with the Awami League, and not with those killers.

She also denounced Khaleda and Tarique as money launderers and arms smugglers.

"Do they have any right to stand by the people of the country, do politics and seek votes?" she asked pointing to Khaleda and Tarique.

Hasina said her Awami League party believes in democracy and multi-party democracy is working in Bangladesh.

"There is an election commission and whoever wants can participate in the election. If any party lacking strength may choose not to take part in voting," she said adding that the people of Bangladesh will go to polls and cast their votes. They never accept any vote rigging," she said.

She said that Khaleda Zia rigged vote in February 15, 1996 and the people pulled her down from the power within one and a half months of the election.

"She was compelled to step down for vote rigging. They (BNP) know better how to rig votes," she said.

She asked the womenfolk to cast their votes as everyone has the voting rights. The women will exercise their democratic and constitutional rights.

"No one can play ducks and drakes with the fates of the people of Bangladesh. We have to continue the development spree of Bangladesh," she said.

She also said that women of the country also have their responsibilities in this regard.

"You will do your job upholding the political, social and cultural rights and contribute to the development of the country," she told the audience.

She said that in any achievement of the country including the national independence women contributed a lot and they have to continue to do so.

"Our prime task is to improve the socioeconomic status of the people of this country. And for ensuring that development, the uplift of the women folks is a must."

In this regard, she said that a society cannot go forward keeping its half behind.