Abul Maal Abdul Muhith, the former finance minister who ushered Bangladesh into the era of trillion-taka budget and whose policies helped shape its economy to its current status, has died under hospital care in Dhaka. He was 88. 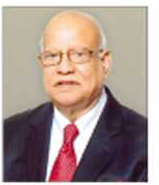 He breathed his last at United Hospital at 12:56am on Saturday, the foreign ministry said in a statement. His younger brother AK Abdul Momen is foreign minister.

After serving Sheikh Hasina's cabinet from 2009 to 2018 - financing the Padma Bridge project from domestic sources after Hasina went toe-to-toe with the World Bank which cancelled $1.2 billion credit being another highlight of his - and delivering the maximum number of 10 national budgets in a row, Muhith signed off from politics in 2019.