We spent all of 21st full of anxiety, worrying about what was happening. At night the guards on duty told us that there had been trouble in Dhaka. According to the radio, a few people had been shot to death. A general strike had been called in Faridpur and students had come up to the jail gate in a procession raising slogans such as 'We want Bengali as the state language', 'Exploitation of Bengalis shall not be tolerated any further', 'We want Sheikh Mujib's release' and 'All political prisoners should be released.' However, I was feeling a bit upset wondering why they weren't raising slogans in my own district Faridpur about Mohiuddin too. It would have sufficed if they had only said, 'We want all political prisoners to be freed.' 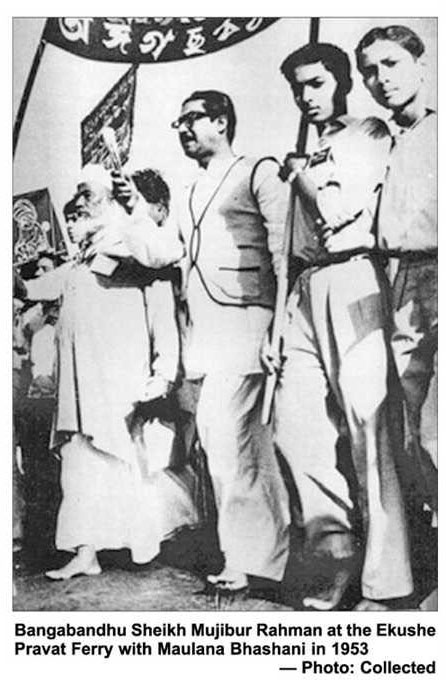 Later that night I became really worried when I heard what had happened in Dhaka. It was difficult to tell how many people had actually died in the city. However, we knew that many people had been shot to death. The two of us were lying in adjacent beds. The physician had asked us not to move at all. But such was our excitement that we were up soon. Two prisoners had been assigned to watch over us and to attend to our needs. They put us back to bed immediately. I was feeling very upset and seemed to have lost all capacity for thought. Why had they resorted to shooting the demonstrators? They were observing a strike and were in a procession, intending to hold a meeting but not to disrupt the law and order situation. Surely no one had any intention of becoming violent. The imposition of Section 144 always leads to violence and an administration is much better off without imposing it.

Very late that night a guard told me that many students had died and many more had been detained. That was all that we found out about the day's happening that night. As it is we were having a tough time going to sleep and now that we knew what had happened sleep proved impossible.

The next day around nine or ten a big procession came out on the wide road next to the jail. Had we been on the first floor we could have heard the slogans clearly and even seen the people in the procession but because they had kept us in a ground-floor room all we could hear was someone using a bullhorn to give a speech. Surely they were addressing us. We could understand a bit of what had happened in Dhaka from it. The jail administration wanted to keep us in the dark. They seemed determined to keep us away from people and to prevent others from talking to us. It would take another day for us to read in the newspaper about what had happened.

On the 22nd, people brought out processions in Faridpur throughout the day. Students raised slogans whenever they came together. Even little children began to chant slogans in the streets. On the 22nd when we got the newspaper we read some stories in it about what had transpired. We found out how rashly the Muslim League government had acted that day. For the first time in the history of the world a race had shed blood for its mother tongue. Nowhere in the world had people been shot to death for demonstrating on behalf of their language. Mr Nurul Amin had not been able to figure out where his dependency on the bureaucracy would ultimately take him. The bullets had been fired inside the Medical College Students' Hostel and not on the road. Even if Section 144 had been violated, it would have been enough to arrest the demonstrators; there was no need to shoot at them. I thought since our boys had shed blood they would end up making Bengali the state language even though I myself would never be able to see that day. When people are destined to self-destruct they tend to make one mistake after another. The leaders of the Muslim League in Bangladesh had failed to understand who were the people making Khawaja Nazimuddin talk in Urdu and why he preferred to speak only in that language. They knew that even a leader of Mr Jinnah's stature had not left our country unopposed after declaring that Urdu should be the only state language of Pakistan. And if that was the case with Jinnah what would Mr Khawaja Nazimuddin's and his followers' fate be? A coterie, adept at intrigue-based politics, was ensuring he was more and more alienated from the masses. They were also cutting off his disciple Nurul Amin from the people of the land. There could be little doubt that this coterie was hatching a deep conspiracy. But then Mr Nazimuddin had never had much of a following in Bangladesh.

I read in the newspaper that Maulana Abdur Rashid Tarkabagish, MLA, Khairat Hussein, MLA, Khan Saheb Osman Ali, MLA, Mohammed Abul Hossain, Khondokar Mushtaq Ahmed and hundreds of other students and party workers had been arrested. Two days later I read that a few professors, Maulana Bhasani, Mr Shamsul Huq and many Awami League leaders and workers had been arrested as well. Narayanganj's Khan Saheb Osman Ali's house had been ransacked and the people inside roughed up. The old man and his children had been roundly abused. People across Dhaka and Narayanganj had been brutalized. In all probability no Awami League workers were outside bars.

The piece is excerpted from The Unfinished Memoirs by Sheikh Mujibur Rahman,