Spirit of Language Movement on the wane

Financial Express: What are the long-term impacts of the language movement?

Ahmad Rafique: There were two phases of the language movement. The first phase was in 1948, and the second and final phase was in 1952. There was only one demand during the initial stage as pronounced in a single slogan- 'We want Bangla as a state language.' Students and youths used to chant the slogan spontaneously. However, the core demand that Bangla should be one of Pakistan's state language had in it embedded a long-term significance, as we can see in the later phase of the movement. As 1952 approached, demand for introducing Bangla in every sphere also gained momentum. There was also another slogan demanding the release of the political prisoners. Students created the slogans spontaneously. In this process, a nationalist spirit of the Bangalees had also emerged, which ultimately led to the bloody war of independence in 1971 and emergence of sovereign Bangladesh. In fact, there is an immense impact of the language movement on our politics, literature and culture.

We all know that on February 21, 1952, police fired and killed students and protestors in Dhaka university area. They were on the streets demanding constitutional and official recognition of Bangla as a state language.

As the news of police firing and crackdown on students broke out, it created pain and anger among the mass people in Dhaka and the entire country. That's why thousands of students, youths, professionals, workers, labourers and even women came out across the country expressing their solidarity with the movement. 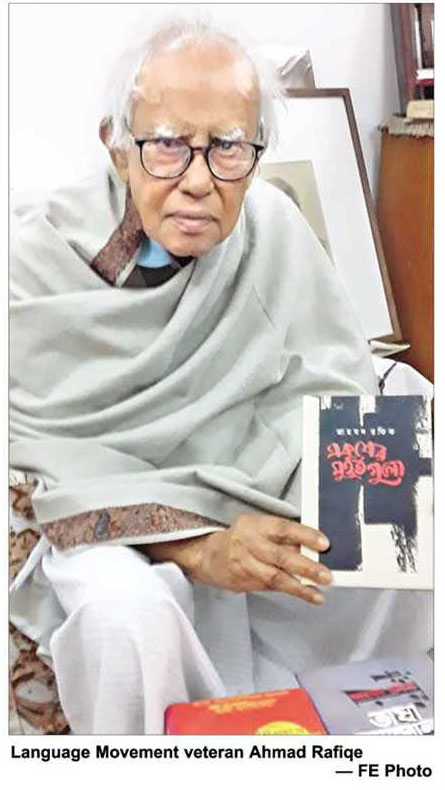 The language movement's long-term success is reflected in a series of political developments in favour of the Bangaless living in East Bengal or East Pakistan. Muslim League, the political party in power, faced a heavy defeat in the 1954 East Bengal legislative elections where the United Front (consisting of the Awami Muslim League, the Krishak-Praja Party, the Ganatantri Dal and Nizam-e-Islam) swept into an overwhelming victory. The language movement highly inspired the United Front's 21-point election manifesto. If the Pakistan central government could presume the defeat of Muslim League, it would suspend the election, as we could see from its next course of action. The people's verdict was not acceptable to the central government, and it forcefully rescinded the result within one and a half months.

Nevertheless, the political struggle continued, and in 1956, Pakistan's first constitution was adopted. The constitution recognised Bangla as a state language beside Urdu. Follow the timeline of the Bangalees' protests, movements and struggles against the oppressive regime of Pakistan. You will see all the landmark events like the Six-Point demand placed by Sheikh Mujibur Rahman in 1966, mass-uprising in 1969 and the landslide victory of the Awami League in 1970 general election in Pakistan are all outcomes of the language movement.

Financial Express: Being a core activist and participant of the movement, you have also devoted yourself to work on the history of the language movement. On which side of history, you focused more?

Ahmad Rafique: A good number of researchers have worked on the history of the language movement. Badruddin Umar and Bashir Al Helal have produced voluminous works with descriptions and analyses in their books. Some others also have written several books. I have focused on multifarious dimensions of the language movement as many small events, and things are linked with Ekeushy February. Events and developments, no matter how small, are important to understand the inspiration behind the movement. We have lost many pieces of information or failed to collect or recollect those. For instance, on the morning of February 23, some Dhaka Medical College students were talking in the medical dormitory premises, which was known as medical barrack at that time. One of them proposed to set up a monument as shahid smritistambho or shahidminar. The idea immediately sparked all of them who were present there. Unfortunately, we couldn't remember or found out who was the young man. We constructed the first monument as shahid smritistambho (martyr's memorial). Though I know many details of the construction, I am not sure who first floated the idea. It is a sad thing for me and others.

Again, the movement was not only confined to Dhaka but it also spread across the country and spontaneously. I have written a book titled Bhasha Andolon: Teknaf Thekey Tetulia (The Language Movement: From Teknaf to Tetulia), where many anecdotes are compiled. In another book titled Ekusher Dinlipi (Chronology of the Language Movement), I have described some critical pre- and post-events of 1952. I have also noticed a trend to distort the history of the movement, especially by some writers and researchers. A section of them skilfully tried to credit the movement to Tamaddun Majlish, a literary and cultural organisation oriented towards Islamic ideology. Again, many described their personal experiences as participants of the activity but failed to maintain accuracy. Some did this unintentionally due to loss of memory. But some did this intentionally to glorify themselves and their leaders and fellows who had little contribution. To contain the distortion, I, along with Abdul Matin, one of the Language Movement's core organisers, wrote Bhasha Andolon: Itihas O Tatparjo (The Language Movement: History and Significance).

It is painful to see that many documents of the Language Movement have also lost forever. We couldn't compile and publish a set of documents. The government has published Bangladesher Sadhinota Juddher Dolilpatro (The Deeds and Documents of The War of Independence of Bangladesh) in 15 volumes. Was it impossible to compile and publish a similar thing on the Language Movement in five or six volumes? Collection of the documents may help clear much of the dust covering the history of the movement.

Financial Express: On several occasions, you asserted that the Language Movement's objective is not attained. Why do you think so, and what are the failures?

Ahmad Rafique: Though the constitution of Bangladesh recognised Bangla as the state language, we have failed to introduce Bangla in all spheres of our life. Bangla is not the official language in the High Court. Bangla also has no place in higher studies in the universities. Finally, we can't make Bangla as the language of our lives and livelihoods. By embracing the colonial legacy, we have accepted English as the core language for our education, court and livelihoods. These all go against the spirit of the Language Movement. That's why the observance of 21st February becomes a formality only and confines to going to Shahid Minar and placing flowers there in the morning. The central Shahid Minar is also not constructed following the original design Hamidur Rahman and Novera Ahmed outlined. If built accordingly, it could be an incredible sight and attraction for foreign tourists. The Bangla Academy-centric month-long book fair, discussion meetings and cultural events are considered homage to the language martyrs. But, we couldn't find out the accurate number of martyrs and their identities. We have also failed to prepare a list of core activists who joined the movement and faced detention. The list of unaccomplished works of the Language Movement is long.