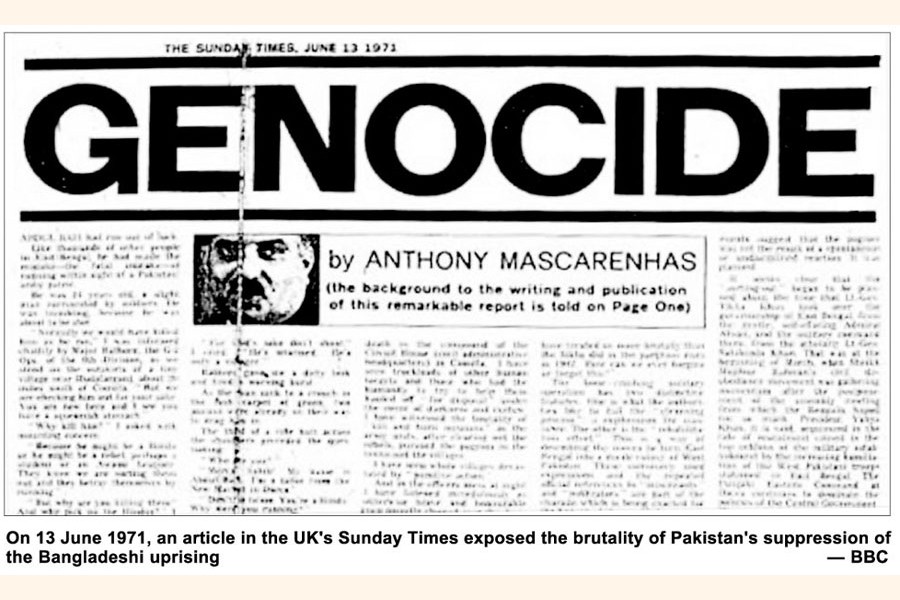 'Operation Searchlight' was a brutal campaign waged by the Pakistani military personnel stationed in Bangladesh territory against the unarmed Bangalis from the night of March 25, 1971. While the Pakistani President General Yahya Khan had ordered this fortnight-long operation (up to 10 April), it was led by the commander of Pakistan eastern command General Tikka Khan. Broadly speaking, the objectives of this operation were: (1) Brutally suppress the mass revolt of the Bangalis by applying military force; (2) Create panic throughout the land by carrying out genocide; (3) Arrest, and if required, kill the student-leaders, prominent stalwarts of the Awami League, and Bangali intellectuals all over the country, including in Dhaka; (4) Disarm the Bangali military personnel as well as members of the militia and police forces, etc. Known as the 'Butcher of Bengal and Balochistan', Tikka Khan's oft-quoted orders for his troops were, "Matti, Matti, Admi Nehi" (We want land only, not the people).

THE PLAN: The operational instructions of this campaign were prepared on February 22, 1971. Major General Khadim Hossain Raja and Major General Rao Farman Ali drafted this plan while sitting at the office of the General Officer Commanding (GOC), Dhaka. They were helped and supported by Lieutenant General S G M Pirzada, Major General Iftekhar Janjua, Major General Aboobaker Osman Mitha et al. The targets and other aspects of the operation were jotted down in the plan. After finalisation of this plan, it was approved by the army chief General Abdul Hamid Khan as well as Tikka Khan on March 20. Under the scheme, the whole of East Pakistan was divided into two zones. The first zone comprised of Dhaka city and its suburbs, and the second zone covered the whole of East Pakistan. Two separate headquarters were pressed into service for directing it. The task of bringing Dhaka city and its suburbs under control was vested on the 57 Brigade led by Brigadier Jahanzeb Arbab. Operations in the remaining areas were the responsibility of Major General Khadim. General Tikka himself took the responsibility of supervising the two groups. He took up position at the martial law headquarters and oversaw the planned killings and destructions in Dhaka. Below him, Major General Mitha and Major General Janjua were assigned to assist Major General Rao Farman Ali and Major General Khadim respectively. The purpose was to bring in Mitha and Janjua as instantaneous replacements if Rao and Khadim failed to discharge their responsibilities. [It may surprise many that General Mitha's wife Indu Chatterji Mitha was a Bangali, whose sister Uma and cousin Kalpana were married to the Bollywood maestros Chetan Anand and Dev Anand respectively.]

The control room of Rao Farman Ali was set up at the martial law headquarters (zone-B) in order to execute the plan in Dhaka. The 57 Brigade, comprising 18 Punjab, 32 Punjab, 12 Baluch, 13 Frontier Force, 31 Field Regiment, 13 Light Action Regiment and 3 Commando Company (Cumilla) were placed under him. Six tanks and the crews of 29 Cavalry were brought from Rangpur Cantonment for deployment on the streets of Dhaka.

The main targets of Operation Searchlight in Dhaka were the Dhaka University area, which was known as the intellectual power-centre of Awami League; the Rajarbag Police Line and the headquarters of East Pakistan Rifles (EPR) at Pilkhana, which were considered as the main source of Awami League's armed power; the slums adjacent to railway-lines, Hindu-inhabited Nawabpur and residential areas of old Dhaka; the offices of the periodicals Ittefaq and The People; and the residence of Bangabandhu Sheikh Mujibur Rahman.

EXECUTION: For conducting the 'Operation Searchlight', the 13 Frontier Force of 57 Brigade was kept as reserve at Dhaka Cantonment, while the 43 light air-force regiment was deployed at Dhaka airport. The 22 Baluch regiment was assigned to attack Pilkhana, 32 Punjab regiment the Rajarbag Police Line, 18 Punjab regiment at old Dhaka, and one company each from 18 Punjab, 22 Baluch and 32 Punjab regiment on the Dhaka University campus. A company of commandos were sent to arrest Bangabandhu. In contrast to the plan for brutally slaughtering the unarmed Bangali population of Dhaka, a field regiment was assigned to protect the Biharis living in Mohammadpur and Mirpur areas.

A decision was also taken to disconnect all domestic and international channels of communication and close down all telephone exchanges, radio, television and teleprinter services during the operation. A 30-hour long curfew was also clamped down from 11 pm on the night of 25 March.

The units participating in the operation were directed to demolish all houses on two sides of the road where barricades were to be found. The members of those households were to be killed where black-flag or the flag of independent Bangladesh was hoisted. Before moving out for the operation, the soldiers were given assurance that they would not have to answer for the genocide, and nobody would have to offer any explanation.

The renowned British journalist Simon Dring of the Daily Telegraph was a witness to the 'Operation Searchlight'. Although the military authority had expelled all foreign journalists from Dhaka and East Pakistan, three journalists hid themselves in the city. They were Arnold Zeitlin, Michael Laurent, and Simon Dring. Of them, Simon Dring published a report on the 'Operation Searchlight' in the 31 March issue of the London-based Daily Telegraph with the headline 'Dateline Dhaka'. Information about the 25 March genocide could be obtained from that report.

The 'H' hour of the operation was fixed at 1 am in the early hours of 26 March. But it was brought forward to 11.30 pm on the night of 25 March. When the Mujib-Yahya dialogue was declared a failure on 25 March evening, and when the news about President Yahya's departure from Dhaka was announced, Bangabandhu urged everybody to prepare for waging an all-out resistance movement. Responding to his call, barricades were instantaneously erected at Farm-gate, railway line of Karwan Bazar, Holy Cross College, University area, Old High Court compound, gate of Curzon Hall, Secretariat road, etc. Attempts were made to enforce the blockade by cutting and throwing trees on roads at some places, placing vehicles on roads upside down, throwing concrete pipes, etc. The resistance activists were shouting the slogan 'Joy Bangla', and some were firing bullets from their rifles. The decision to bring forward the time of launching the operation to 11.30 pm was taken so that different spots of Dhaka city could be reached before the revolting Bangalis put up resistance.

The Pakistani soldiers came out of the cantonment at 11.30 pm and started the operation by attacking resistance fighters at Farm-Gate. Due to the firing, some of the fighters were killed, while others went into hiding.

ASSULT: A combined unit of 18 and 32 Punjab regiments as well as 22 Baluch launched the assault on Dhaka University. They used all kinds of weaponry including rocket launchers, recoilless rifles, mortars, and machine-guns. The assaults on Iqbal Hall (now Zahurul Haq Hall) and Jagannath Hall were very severe and a large number of students were killed due to indiscriminate firing. The soldiers killed many students through charging bayonets and by firing on them after entering the halls. In this way, around 200 students were killed in Iqbal Hall alone, while 36 students were killed in Jagannath Hall. The former provost of Jagannath Hall and eminent philosopher Professor Gobinda Chandra Deb was also killed brutally on that dark night. The provost of the Hall Professor Jyotirmoy Guhathakurta was admitted to Dhaka Medical College Hospital after being shot; he died there on 30 March. Some teachers were killed in the staff quarters adjacent to Jagannath Hall (ANM Muniruzzaman of statistics department, Dr Anudoipayan Bhattacharya of the department of Applied Physics, Dr Fazlur Rahman, et al). Family members and relatives staying in the teachers' quarters were also killed brutally. A unit of the Pakistani forces killed 46 persons on that night after entering the staff quarters of Rokeya Hall. Genocide was also carried out at the nearby Liaquat Hall of Engineering University, and thirty dead-bodies were found there. The Pakistani soldiers also murdered the owner of Mohdu's Canteen Modhusudan Dey as well as three members of his family.

The soldiers of 32 Punjab regiment led by Lieutenant Colonel Taj launched an attack on the Rajarbag Reserve Police at 11.30 pm. The Bangali police personnel tried to resist them, but the Pakistani forces launched a simultaneous attack on them with tanks and heavy weapons from the direction of police line hospital. Apart from shelling, all four sides of the police barrack caught fire due to hurling of petrol bombs. The police personnel moved to the main building in self-defence, but the Pakistani soldiers succeeded in taking control of the Rajarbag Police Line before dawn. Around 2,000 Bangali policemen were killed on that night.

There were around 2,500 Bangali EPR personnel at the Pilkhana headquarters of East Pakistan Rifles. They offered resistance when 22 Baluch regiment attacked them at 12 midnight. The battle of resistance continued throughout the night. The next day on 26 March, the tank unit came forward to assist the Pakistani soldiers. Finally, the resistance of the Bangali EPR soldiers came to nought, and around 700 of them were slayed. Many of them were also taken captive; they were dragged to the torture centre of Mohammadpur Physical Education College, and then killed after inflicting inhuman torture.

The Pakistani soldiers carried out large-scale genocide in the Hindu-inhabited areas of old Dhaka, such as Tanti Bazaar, Shankhari Bazaar, Nawabpur, English Road, Babu Bazaar, Naya Bazaar, etc. A unit of the soldiers set fire to different houses after throwing petrol and shooting indiscriminately. As a result, around 700 people were slaughtered in the area on that night.

Many were also killed when an attempt was made to disarm the Bangali EPR personnel working at the Governor House. The Bangali police personnel put up resistance when the Ramna police station was attacked. Many were killed as a result, from where 45 prisoners were taken to unknown places. They could not be traced out later on. Moreover, many Bangali policemen were killed during the resistances at Sutrapur, Faridabad and Babupura police outposts.

The patrols of Pakistani soldiers destroyed the slums adjacent to railway lines; many shopkeepers-employees of different markets were shot dead while asleep. The people who tried to escape were killed indiscriminately. The office of the English daily 'The People' was set on fire. Around 400 people had taken shelter at the office of Daily Ittefaq, but almost all of them were burnt to death when the whole building was set on fire at 4.30 am on 26 March. In this way, thousands of people were killed by the Pakistani forces throughout the night of 25 March and the early hours of 26 March in Dhaka city. After the massacres were over, corpses were thrown into mass-graves, and at many places, the dead-bodies were removed by trucks. In spite of that, corpses were found strewn all over Dhaka's roads and ports. The metropolis Dhaka appeared to be a dead city in the morning of 26 March.