The road to liberty 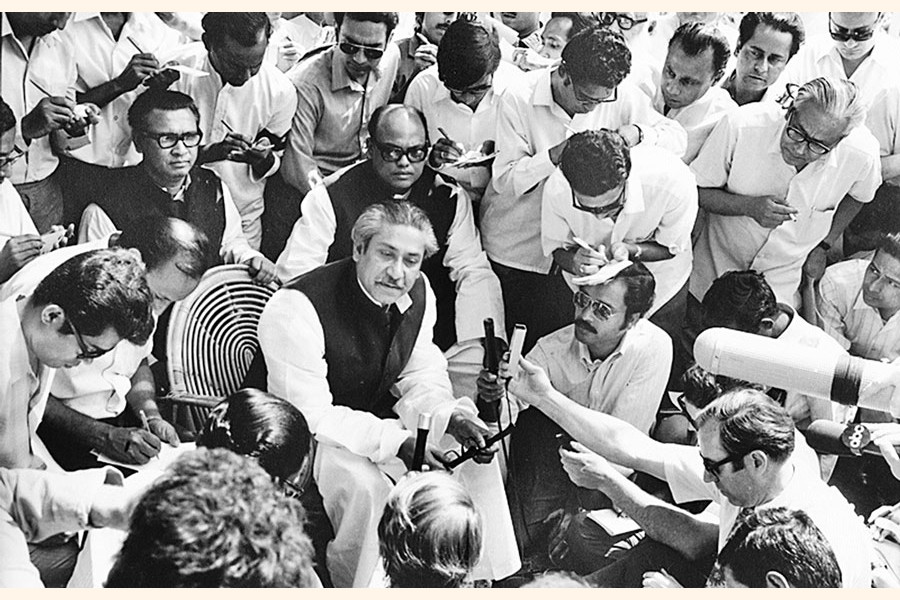 Bangbandhu is talking to the local and foreign journalists on March 23, 1971 — Photo: Collected

March 25, 1971 dawned in unease, both among the Bengali political leadership and the population as a whole. From the early part of the day, rumours began to make the rounds of an imminent army operation against the Bengali nationalist movement, which was now vociferously demanding that Bangabandhu Sheikh Mujibur Rahman declare the independence of the province. The leaders of the Awami League waited to hear from the junta, but when nothing came from that side and the day slowly progressed to afternoon, Mujib and his colleagues knew that the end had drawn nigh. 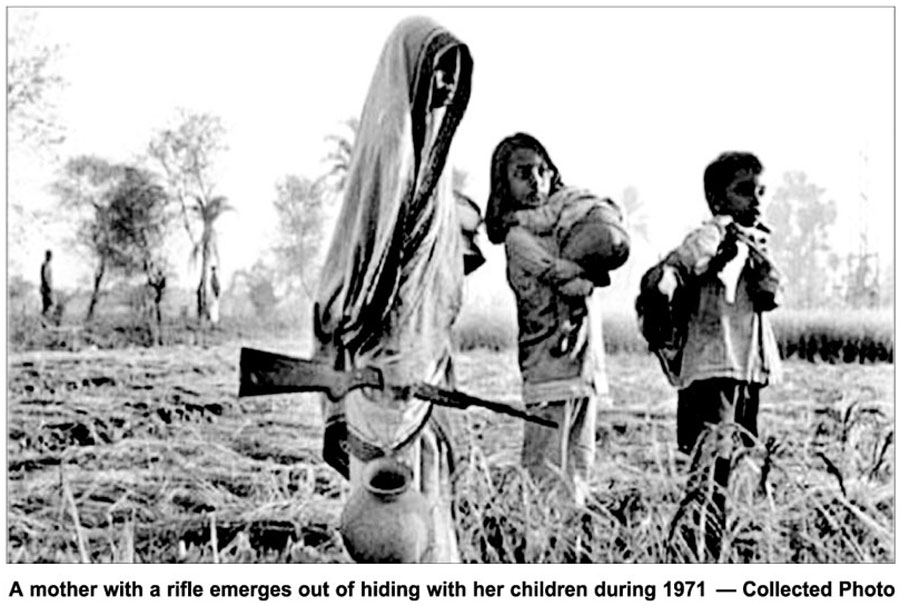 By early evening, the Awami League had given a call for a general strike all over the province on the following day even though it did not quite know the turn conditions would take between the evening of 25 March and the beginning of 26 March. As dusk fell on 25 March, news began to circulate that President Yahya Khan and his team had flown off to West Pakistan. It did not take long for the Awami League to confirm that the leader of the military regime had indeed left Dhaka. His departure was the earliest hint that a major crackdown by the army could be only hours away.

Angry Bengalis, in their determination to resist the soldiers should they venture into the streets, erected makeshift barricades at important points in the city. In the Dhaka University campus, in Motijheel, the business district of the city, and on the road leading out of the cantonment into the city, young Bengalis struck down trees and bamboos and picked up stones and bricks to litter the roads with obstacles that would make it difficult for the soldiers to break through. It was naivete at work, with few citizens really aware of the terrible force the army might use in its attack.

But it was, at the same time, a desperate move on the part of a population which was now confronted with circumstances that threatened the political movement which had gone on for the past nearly one month. From various parts of the city, slogans of Joi Bangla, victory to Bengal, made popular by the Awami League over the previous couple of years through its emphasis on the Six Points, were heard. But, at the same time, the streets cleared quickly as citizens went through deep foreboding at how the night would turn out to be.

At his home in Dhanmondi, Bangabandhu Sheikh Mujibur Rahman was being difficult with his party colleagues and workers, all of whom wanted him to make his exit from the city and lead what they saw as a coming struggle for independence from Pakistan. The Awami League leader, uncharacteristically pensive and not wasting many words in his defence, refused to entertain any thought of going into hiding. He was, he told his party men, the elected leader of the majority party in the national assembly and therefore could not be expected to escape. Besides, if he left Dhaka, a maddened army would burn every home down looking for him. He preferred to wait and let the army take him, as it had in earlier times, into custody. But he told the assembled leaders and workers that they should fan out into the country and prepare for the coming struggle for liberation. As the evening deepened, Awami League leaders, journalists who had come to observe his next moves, friends and others left Mujib's residence.

He was now in the company of his family --- wife Fazilatunnessa, daughters Hasina and Rehana and sons Kamal, Jamal and Russell. As the first sounds of gunfire were heard from the approach out of the cantonment, his elder daughter Hasina remembered, Mujib sent out a message through wireless proclaiming Bangladesh's independence. It was brief and to the point. With the army on its way, as Mujib knew, the elected leader of the majority party in Pakistan's national assembly and spokesman of the seventy five million Bengalis inhabiting the province of East Pakistan had the following directive transmitted to the outside world, which of course at that point was symbolised by the land he sought to make free:

"This may be my last message. From today Bangladesh is independent. I call upon the people of Bangladesh, wherever they might be and with whatever you have, to resist the army of occupation to the last. Your fight must go on until the last soldier of the Pakistan occupation army is expelled from Bangladesh. Final victory is ours."

Bangabandhu's declaration of independence was swiftly borne out by a report distributed on 26 March by the US Defence Intelligence Agency to the White House Situation Room, Department of State and other government agencies in Washington. Titled 'DIA Spot Report', the agency noted thus:

1. Pakistan was thrust into civil war today when Sheikh Mujibur Rahman proclaimed the east wing of the two-part country to be "the sovereign independent People's Republic of Bangla Desh." Fighting is reported heavy in Dhaka and other eastern cities where the 10,000-man paramilitary East Pakistan Rifles has joined police and private citizens in conflict with an estimated 23,000 West Pakistani regular army troops. Continuing reinforcements by sea and air combined with the government's stringent martial law regulations illustrate Islamabad's commitment to preserve the union by force. Because of logistical difficulties, the attempt will probably fail, but not before heavy loss of life results.

2. Indian officials have indicated that they would not be drawn into a Pakistani civil war, even if the east should ask for help. Their intentions might be overruled, however, if the fever of Bengali nationalism spills across the border.

3. Sheikh Mujibur Rahman is little interested in foreign affairs and would cooperate with the United States if he could. The west's violent suppression, however, threatens to radicalize the east to the detriment of US interests. The crisis has exhibited anti-American facets from the beginning and both sides will find the United States a convenient scapegoat.

Bangabandhu Sheikh Mujibur Rahman, having sent out the declaration of independence, climbed the stairs leading from his library, from where he had sent out his message, and joined his sombre family on the first floor. He was poised, almost at peace with himself. But he knew, as well as anyone else in his family and among his colleagues, that the future for him was uncertain. The state of Pakistan was determined to get him and possibly finish him off.

Ironically, it was the state of Pakistan which was on its way to disaster.

Syed Badrul Ahsan is a senior journalist and writer.